BRUSSELS: British Prime Minister Theresa May said Thursday she is considering a European Union proposal that would keep Britain bound to the bloc’s rules for more than two years after it leaves, and idea that angers her pro-Brexit critics in the U.K.

At present the two sides say Britain will remain inside the EU single market, and subject to the bloc’s regulations, from the day it leaves on March 29 until December 2020, to give time for new trade relations to be set up.

But with divorce talks stuck, the bloc has suggested extending that period, to give more time to strike a trade deal that ensures the border between Northern Ireland and the Republic of Ireland remains friction-free — the main sticking point to a Brexit deal.

May said the U.K. was considering extending the transition period by “a matter of months.” But she said she didn’t believe the extension would be needed. 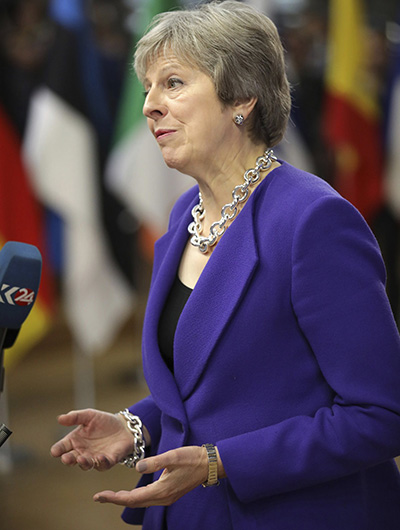 “We are working to ensure that we have that future relationship in place by the end of December 2020,” May said as she arrived at EU headquarters in Brussels on Thursday for meetings on migration, security and other issues.

The extension idea has angered pro-Brexit U.K. politicians, who see it as an attempt to bind Britain to the bloc indefinitely.

In an open letter to May published on Thursday, leading Brexiteers accused the EU of “bullying” and said the border issue was being used as “a trap” by the bloc.

The letter signed by former British Foreign Secretary Boris Johnson, ex-Brexit Secretary David Davis and other pro-Brexit Conservatives warned May not to “engage in a show of resistance and a choreographed argument followed by surrender” to the EU.

Divorce talks between Britain and the bloc have stalled on the issue of the Irish border, which will be the U.K’s only land frontier with the EU after Brexit. Both sides agree there must be no hard border, which could disrupt businesses and residents on both sides and undermine Northern Ireland’s peace process. But each has rejected the other side’s solution.

This week’s summit, which had been billed as a make-or-break moment, turned into a chance for both sides to give themselves more time — perhaps until the end of the year — to break the logjam.

May urged both parties to show “courage, trust and leadership,” but came to Brussels without the concrete new proposals the EU has asked for. Chief EU negotiator Michel Barnier said that “we need much time, much more time, and we continue to work in the next weeks.”

The lack of progress means a special EU summit on Brexit that had been penciled in for next month to finalize a deal has been scrapped, though EU leaders said they would assess the situation in the coming weeks.

The next official EU summit is scheduled for December, just over three and a half months before Britain ceases to be an EU member. Any deal that is struck will have to be approved by the British and European Parliaments.

Conservative lawmaker Nick Boles said there was a growing worry among many U.K. legislators that Britain and the EU were “trying to run out the clock” in order to stymie opposition to their plans.

“They are trying to leave this so late that they can credibly say there is no alternative but a ‘no-deal’ Brexit, and most people agree that would be chaos,” Boles told the BBC.