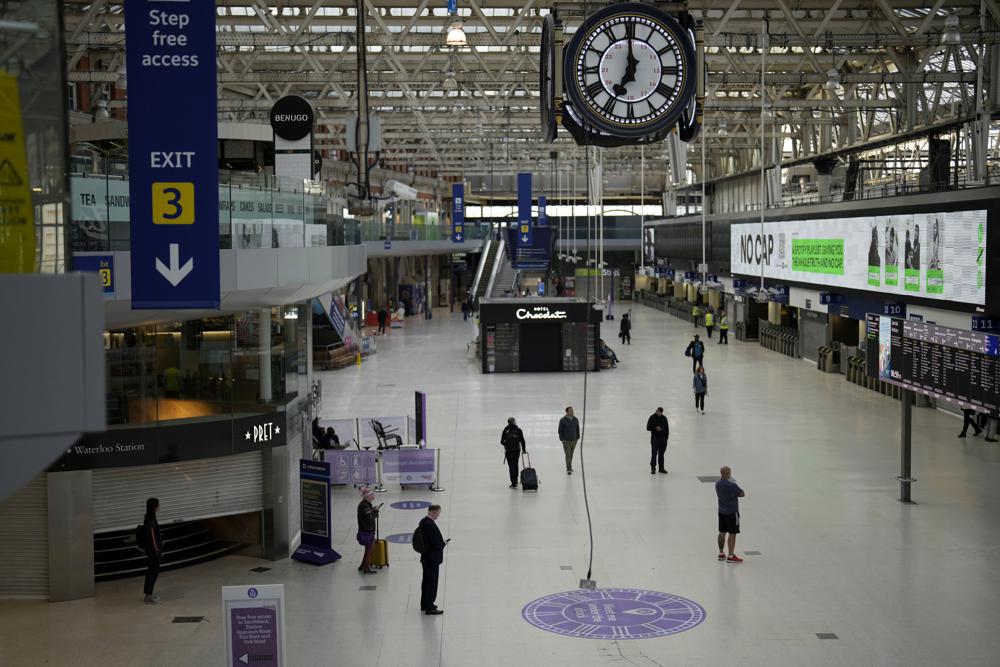 LONDON: Tens of thousands of railway workers walked off the job in Britain on Tuesday, bringing the train network to a crawl in the country’s biggest transit strike for three decades — and a potential precursor to a summer of labor discontent.

About 40,000 cleaners, signalers, maintenance workers and station staff held a 24-hour strike, with two more planned for Thursday and Saturday. Compounding the pain for commuters, London Underground subway services were also hit by a walkout on Tuesday.

The dispute centres on pay, working conditions and job security as Britain’s railways struggle to adapt to travel and commuting habits changed — perhaps forever — by the coronavirus pandemic. With passenger numbers still not back to pre-pandemic levels but the government ending emergency support that kept the railways afloat, train companies are seeking to cut costs and staffing.

Sustained national strikes are uncommon in Britain these days, but unions have warned the country to brace for more as workers face the worst cost-of-living squeeze in more than a generation. Lawyers in England and Wales have announced they will walk out starting next week, while unions representing teachers and postal workers both plan to consult their members about possible actions.

Major railway stations were largely deserted on Tuesday, with only about 20% of passenger trains scheduled to run. Services will resume Wednesday, but lingering disruption means only about 60% of trains are due to operate. Talks between the Rail, Maritime and Transport Union and employers are also due to resume Wednesday, though the two sides appeared far apart.

The strike upended the plans of employees trying to get to work, students heading for end-of-year exams and music-lovers making their way to the Glastonbury Festival, which starts Wednesday in southwest England.

Roads in London were more congested than usual as commuters turned to cars and taxis. But footfall was 27% lower than last Tuesday, according to retail analysts Springboard, as many people canceled trips or worked from home if they could.

Nurse manager Priya Govender was at London Bridge station Tuesday morning, struggling to get back to her home south of the city after spending the night in a hotel.

“I definitely will not be able to get a bus because they are packed. I will have to get an Uber,” she said. “My day has been horrible. It is going to be a long day, and I still have a full day’s work to do.” She planned to work from home, once she made it there.

The Centre for Economics and Business Research consultancy said the three days of strikes could cost the economy at least 91 million pounds ($112 million).

With inflation currently running at 9%, the RMT union says it cannot accept rail firms’ latest offer of a 3% raise.

But the train companies argue they can’t offer more, given current passenger numbers. There were almost 1 billion train journeys in the U.K. in the year to March — compared to 1.7 billion in the 12 months before the pandemic.

While the Conservative government says it’s not involved in the talks, the union notes that it plays a major role in the heavily regulated industry, including providing subsidies long before the pandemic, and argues it could give rail companies more flexibility to offer a substantial pay increase.

The government has warned that big raises will spark a wage-price spiral driving inflation even higher.

Electrical engineer Harry Charles said he supported the strikers — even though his normal 10-minute train journey to London Bridge took him 90 minutes by bus.

“Their money is not going up, and the cost of everything is rising,” he said. “The strike has caused a lot of hassle for people, but everyone wants be able to eat and be able to afford to put in a good day’s work.”

All sides are keeping an eye on public frustration, especially in the event of repeated disruptions, and Prime Minister Boris Johnson was quick to pin responsibility for the strike firmly on the unions.

He told his Cabinet on Tuesday that the strikes were “so wrong and so unnecessary,” and said “union barons” should sit down with bosses and come to a deal.