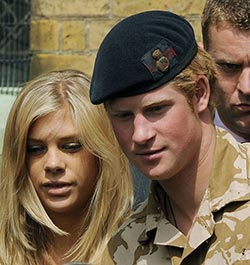 THE British royal family thought Prince Harry’s ex-girlfriend Chelsy Davy was needy and “driving Harry nuts” with a bombardment of texts and calls, a court heard.
The Zimbabwe-born socialite was accused of blitzing the prince with messages and calls while he was undergoing training at Sandhurst, jurors in the trial of ex-News of the World staff were told.
An email from Clive Goodman, the paper’s former royal correspondent to his editor Andy Coulson, was shown to the Old Bailey with details of the now defunct tabloid’s surveillance of Harry and Davy.
In the 2005 email, Davy was said to be liked “well enough” by the royals, but they were concerned about her influence on him.
“Chelsy is driving Harry nuts, she won’t leave him alone,” he said.
“He’s not allowed to use his mobile at Sandhurst until he’s off duty. But she’s blitzing him with dozens of calls and texts when he should be concentrating on training.
“Family likes her well enough but they’re worried that she’s incredibly needy just at the time when Harry needs to be concentrating on himself.”
He also wrote that in just over one month Davy, now aged 28, made almost 60 calls to Harry’s mobile phone.
“That’s on top of texts,” added Goodman, who was jailed for intercepting mobile phone messages involving members of the royal household in 2007.
“Harry can only field these after he’s finished his training duties, sometime after 10pm.”
Goodman, 56, and Coulson, 45, along with all the other defendants in the trial deny all the allegations. The trial continues.Advertisement