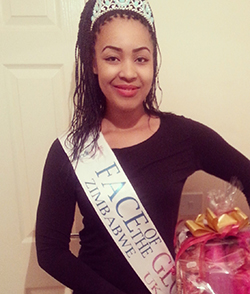 ALL eyes will be on Zimbabwean Beauty, Alishia Musungo on Friday as she competes with contestants from over 15 countries for the Face of the Globe 2013 title.
Bio-medical student Alishia won the Zim UK Finals in August and among her prizes was a seven-day all expenses paid trip to Paris to compete in the global finals.
“Excited is not even the word, we are so proud of Alishia and know she is going to do great,” said stated pageant director, Lorraine Chinouriri.
“The boot camp and fun starts on Sunday (October 20) and all the ladies have travelled from across the globe to compete in what will be a memorable event.
“We have had amazing support from Zimbabweans and a great turn-out on the night Alishia was crowned, so she knows Zimbabwe is cheering her on.”
Chinouriri said the first leg of the finals will start in London, with the ladies staying in a top hotel and travelling around the UK capital on tourist excursions before travelling to Disneyland, Paris where they will spend the rest of the week at the Prestigious Newport Bay Club Hotel, where the crowning will be held.
Since winning the london finals, 18 year old Alishia who works part time in addition to being a university student has been raising money for charity, and preparing for the finals.
“My biggest ambition in life is to achieve all my goals and inspire others through my hard work,” she said.
“I believe the greatest fulfilment in life is to be happy which can be achieved by following your dreams and doing what you love.”
The pageant, which has excluded the controversial swimwear round, and welcomed mothers and married women to compete, encourages intelligence and elegance.
“We are not the typical, we are the only pageant I know that provides an international platform for all women,” said Chinouriri.
“I know pageants are often not seen in a good light and their directors are labelled as money hungry but that is not the case with Face of the Globe Zim, our team is made up of volunteers including myself and proceeds go to our next event as well as charity.
“Sponsors who understand our mission and support women empowerment really know what it’s about, I do invite any questions from the public because I know they might be curious as to why pageants are a big part of our society.”Advertisement

Entrepreneur, Chinouriri said she plans to travel to Zimbabwe to crown winners who will join the Zim UK winners for the 2014 finals.
“We are working on holding finals in Zimbabwe and the UK,” she said.
“This year we only picked one winner, next year we want four winners from the UK and four from Zimbabwe so all 8 can compete in Paris. It’s a fantastic, life-changing platform and I want everyone who wants the opportunity to get given their chance.”