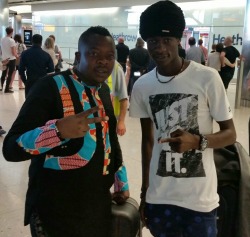 THE UK Summer Invasion Tour and Festival has begun with organisers saying they were certain to deliver a Southern African music, culture and arts “experience of exceptional quality”.
The 3-day summer festivities will take place in Birmingham, Luton and Manchester from the 26th to the 28th of August 2016. The festival will feature an innovative and interactive set of activities alongside performances by high profile artists including live performances, exhibitions, workshops and more.
“Due to circumstances beyond the UKSI Team and its supporting partners control, our Wild Card Acts Fungisai and Dboi and Sparxx travelling arrangement have been delayed due to some pending verification processes with the UK Border Force authorities,” said a statement from the organisers.
“We are still hopeful that Fungisai and Dboi & Sparxx will arrive in the United Kingdom for the Saturday and Sunday shows if the verification process goes as planned. Also, female Chanter Ninja Lipsy will not be travelling for the tour for medical reasons.”
UKSI team also apologised to any of Fungisai, Dboi and Sparxx fans for the “inconvenience as we know the heavy anticipation in meeting your favourite artists and we are working behind the scenes to make sure that we fulfil our promise of delivery a quality UK Summer Invasion experience which is unmatched.”
According to the statement, there will be a Pihwayi Madrinks session enforced at all venues for the first 3 hours where all alcoholic and non-alcoholic drinks will be available at reduced happy hour prices. Authentic Southern African cuisine will be served at all venues.
Meanwhile, the final headline performance list will be as follows:
Zimbabwean Travelling Acts
i)       Tocky Vibes – arrived
ii)      FreeMan – arrived
iii)     ShinsoMan – arrived
iv)     Killa Trilla
v)     King Inity
vi)    Wild Card Act 1: Gemma Griffiths
UK Based Acts