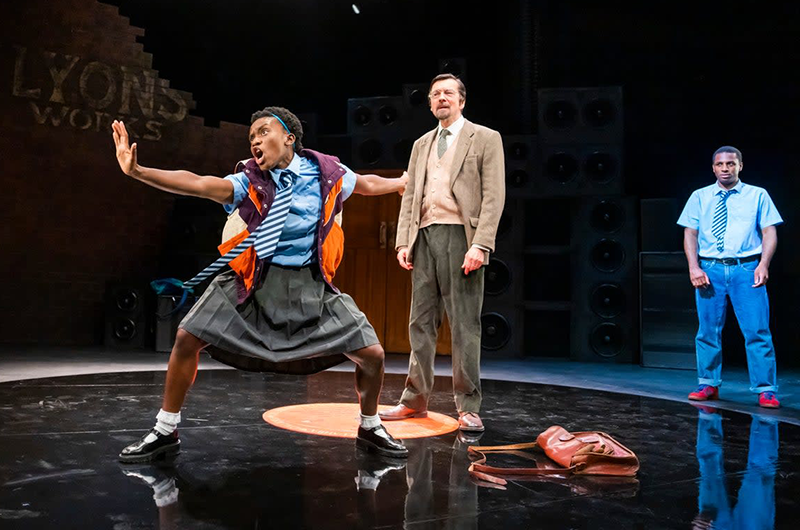 LONDON: This drama about family, race and autism opens in a whirl of disorientation. A character clutches a handbag and won’t let go, another tries to prise it away in anger and a girl runs on to the stage then disappears again. Scenes change quickly and a large circular floor, with vinyl record design by Jean Chan, revolves at the centre to snatches of music.

The discombobulations effectively take us into the life and mind of Dwight (Lee Phillips), whose autism is not diagnosed for some of his childhood. Phillips switches between playing 11-year-old Dwight, growing up with his Black British family in Leeds, to a grown man in the present day contending with his jumble of memories.

Zodwa Nyoni’s hard-hitting play is framed by a funeral in the present, and a series of events in 1981 when Dwight’s autism has yet to be identified or understood. Imaginatively directed by Nancy Medina, this play is a study of autism in an era of open racial hostility, from police prejudice to biases within social services. While we are starting to see more plays about autism, it is far rarer to see its intersections with race and family, as we see dramatised here to powerful effect.

The scenes from the past feature a family home in Chapeltown where Dwight’s 13-year-old sister, Shirley (Brianna Douglas), craves more attention; his father (Andrew French) has just lost his factory job; and his mother (Nadia Williams) is contending with the stresses of her son’s disorder while keeping everything else afloat. The plot takes harrowing turns after a social worker visits and Dwight is picked up by a police officer on the street and detained under the Mental Health Act.

The play brings up a host of meaty themes, some of which it does not have the time to develop more fully, including Dwight’s tense relationship with his father, who warns that he cannot afford to “act out” in a world poised against black men (“They’ll put you down any chance they get. You can’t be doing all this screaming”) and Shirley’s resentment at the energy his condition demands from the family, as well as her later guilt.

The characterisation is full of warmth but feels too flat at times and it generally seems like a play that is trying to do too much at once. The script is occasionally a little unsubtle and too plot-driven. Williams, who also doubles as the older Shirley, gives an especially spirited performance as the mother. It takes some time to acclimatise to Phillips’s performance when he plays Dwight as a child but it is a good slow-burn portrayal, and he is particularly captivating in the few scenes of stillness, or when he is listening to his family’s records.

In fact, the play truly comes alive in its sound and brings sudden bursts of light – when Dwight is dancing to the records, listening to the radio or dancing with his mother. These moments of release are a joyous counterpoise to the drama’s darkness.