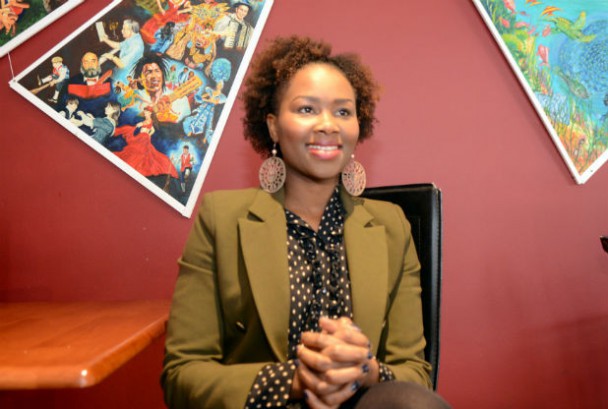 WHEN Tino Dzaro touched down in Swansea ahead of studying for an aerospace engineering degree in 2010 she had no idea that three years later she would be engineering the take off of her very own coffee bar in the city
Her career flight path was supposed to see the 27-year-old enjoy a lucrative job working in the aeronautical industry in sun-drenched destinations around the globe but she hadn’t taken into account the fact that she would fall in love with Swansea.
She explains: “I came to Swansea to study and then I fell in love with the sea; I can never be away from Swansea, I love it here.
“My favourite place on Gower is Three Cliffs Bay, it’s my absolute favourite, I love being there, going for walks and enjoying the scenery.
“I grew up in Zimbabwe, which is landlocked, but we spent a lot of our holidays in Durban, in South Africa, where I learnt to love the sea.
“There is a bit of a difference in the weather; out there the waves are crazy and it is often too dangerous.
“Then there are the sharks, once we had just left the sea and there was a shark attack; someone was killed and we saw all the blood. You don’t have that on Gower.”
Having stumbled across what is now Tino’s, in Wind Street, and made her mind up to stay, there was the delicate matter of breaking the news to her mother.
She says: “I called my mother two weeks after finishing my last exam and said, ‘Listen, I’m not coming home, it’s time I moved out and tried to stand on my own two feet and, by the way, I’m not going to use my degree, I’m going to open a coffee bar’.
“She just said, ‘We’ll speak about it when you come home for the summer’. So I had to go home to explain it properly.
“I showed her my business plan and she said, ‘I don’t think this is a good idea. You have your degree and all these companies chasing you, you have all these countries you can go and work in’.
“She had spent an enormous amount putting me through university but I told her it’s not what I want to do right now and I came back to Swansea.
“A week later I called her and said, ‘You have got to come to Swansea and see for yourself, I can’t do this without your blessing’.
“She drove down and we went for lunch in the marina and afterwards we came here. When I opened the door she was in tears. She said, ‘Wow! I can see why you want to do this’. She gave her blessing in the end.Advertisement

“I have always wanted to run my own business and when the opportunity to have this space came up it was too good to miss.
“I thought, ‘How haven’t I seen this space before?
“My idea was to have it as the chill-out and welcoming space on Wind Street. I love Wind Street, and I am grateful for what it does in putting Swansea on the map, but there is a demand for something traditional and more cultural; so that is what I’m doing.”
From next month Tino will compete with the late night market as the cafe’s alcohol licence will be extended until 1am.
She says: “I want to build it up slowly and become a place that has ambience, where you can come and have a drink and chill, at the moment there’s not many places where it’s not rowdy. Everyone likes a rowdy drink but before you want to be able to chill and have a conversation; that’s what I’m trying to create.”
In line with her philosophy of providing something more cultural compared to the hedonistic reputation of Wind Street, Tino regularly hosts comedy, salsa and poetry evenings and is hoping to arrange live music once a week.
And as for her degree, she says: “I would never rule out using it at some point in the future but at the moment my focus is firmly on making my business a success.”
And with her drive, passion and determination there is every chance it will fly.
This article is taken from the South Wales Evening Post.