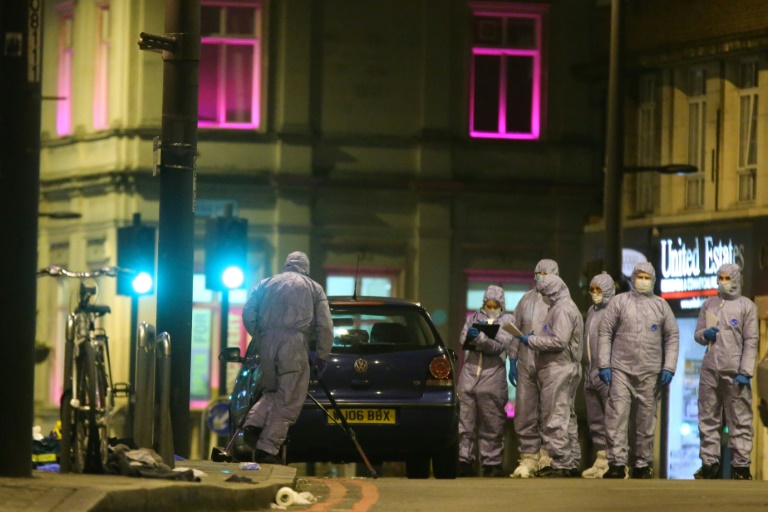 Police forensic officers work on Streatham High Road in south London after Sudesh Amman, 20, who was wearing a fake suicide vest, was shot on the busy road packed with shoppers
Spread This News

The British government promised sweeping changes to the system for dealing with convicted terrorists released from prison, after police shot dead an Islamist extremist who stabbed two people in a busy south London street on Sunday.

Police said Sudesh Amman, 20, who was wearing a fake suicide vest, was shot on the busy Streatham High Road packed with shoppers at about 2:00 pm (1400 GMT).

Amman was recently given early release from prison where he was serving time for terror offences.

The incident came just over two months after armed police shot dead a convicted terrorist on early release when he stabbed to death two people attending a prisoner rehabilitation conference near London Bridge in the heart of the British capital.

The government responded to that attack by announcing longer sentences for terrorism offences, an end to early release and an increase in the counter-terrorism police budget in the coming financial year.

Prime Minister Boris Johnson said after the latest incident: “Tomorrow (Monday) we will announce further plans for fundamental changes to the system for dealing with those convicted of terrorism offences.”

Deputy Assistant Commissioner Lucy D’Orsi said in a statement outside New Scotland Yard: “The suspect had been recently released from prison where he had been serving a sentence for Islamist-related offences.”

She added: “The suspect has not yet been formally identified however… we are confident he was Sudesh Amman, aged 20.”

Amman was jailed in December 2018 for 13 terror offences and was released from prison in recent weeks under “active police surveillance”, media said.

He had been arrested in north London in May 2018 on suspicion of planning a terrorist attack, a month after officers were told of posts he had made on the secure messaging service Telegram.