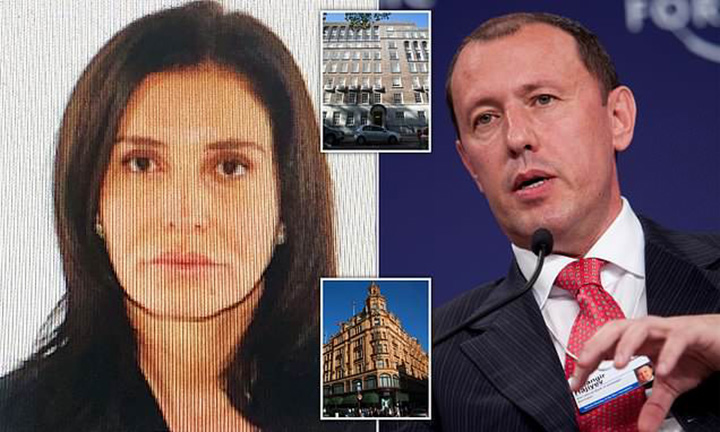 LONDON: A woman fighting to keep her £11.5m London home, after becoming the first target for the UK’s new anti-corruption law, has been named as Zamira Hajiyeva.

Mrs Hajiyeva – who is originally from Azerbaijan – lost a legal battle to stay anonymous after the media argued the public should know the full facts.

The wife of a former state banker spent £16m in Harrods over a decade.

She also bought a house close to the store – and a golf course in Berkshire.

The High Court has ordered her to explain the source of her wealth – and she risks losing her property if she cannot do so.

Under the terms of the UK’s first ever Unexplained Wealth Order, Mrs Hajiyeva, 55, must now provide the National Crime Agency with a clear account of how she and her husband, Jahangir Hajiyev, could afford to buy their large home in the exclusive London neighbourhood of Knightsbridge.

Mrs Hajiyeva’s lawyers said the UWO “does not and should not be taken to imply any wrong-doing”, by her or her husband. They have applied for permission to appeal against the order.

Who are the couple at the centre of this first action?

Jahangir Hajiyev is the former chairman of the International Bank of Azerbaijan.

He was jailed in 2016 for 15 years after being convicted of being part of a major fraud and embezzlement that saw tens of millions of pounds disappear from the bank. Judges also ordered him to repay $39m.

Seven years earlier, a company based in the British Virgin Islands paid £11.5m for a large home, just minutes’ walk from Harrods in west London.

The High Court heard that the ultimate owners were Mrs Hajiyeva and her husband.

In 2013, another company controlled by Mrs Hajiyeva spent more than £10m buying Mill Ride Golf Club in Berkshire, a plush course and estate near Ascot.

The Home Office gave Mrs Hajiyeva permission to live in the UK under a visa scheme for wealthy investors.

How much money did the couple bring to the UK?

During a High Court hearing in July, in which the couple were known only as Mr and Mrs A, it was revealed that Mrs Hajiyeva had an enormous amount of disposable income.

Examples of her big spending, revealed to the court, included £150,000 spent on a single day on Boucheron – a luxury jewellery, perfume and watches brand.

The next day, the court heard, she topped up the wine cellar by spending £1,800.

In a ruling upholding the Unexplained Wealth Order, Mr Justice Supperstone said: “I agree with the NCA that this evidence is significant in the light of the reports of Mr A’s trial that allegations made against him included abuse of his position at the Bank by issuing credit cards in the names of family members, through which large debts were run up against the Bank.”

Duncan Hames, director of policy at Transparency International UK, said the pressure group was “delighted” at the use of the Unexplained Wealth Order.

“UWOs should now be used more widely to pursue more of the £4.4 billion worth of suspicious wealth we have identified across the UK,” he said.

No – she says she is innocent of the accusations and tried to challenge the Unexplained Wealth Order after it was imposed in February.

Lawyers for Mrs Hajieyva told the High Court that she and her husband are suffering a massive injustice.

“The decision of the High Court upholding the grant of an Unexplained Wealth Order against Zamira Hajiyeva does not and should not be taken to imply any wrongdoing, whether on her part or that of her husband,” they said in a statement.

“The NCA’s case is that the UWO is part of an investigative process, not a criminal procedure, and it does not involve the finding of any criminal offence.”

Jahangir Hajiyev denies defrauding his bank – but has unsuccessfully appealed against his conviction. His lawyers say that he fell out with Azerbaijan’s corrupt ruling family and paid the price.

He is asking the European Court of Human Rights to intervene in his case.

During her unsuccessful challenge to the Unexplained Wealth Order, Mrs Hajiyeva said her husband was a legitimate businessman who had become independently wealthy thanks to a string of successful businesses, before becoming a chairman at the bank.

But the National Crime Agency told the court that Mr Hajiyev had been a state employee between 1993 and 2015 – and as an official he would not have had the means to amass the wealth investigators have traced.

What is an Unexplained Wealth Order?

A UWO is a new power which has been designed to target suspected corrupt foreign officials who have potentially laundered stolen money through the UK.

Investigators from the National Crime Agency believe there are billions of pounds of dirty money invested in British property – but it is almost impossible to charge the owners with a crime or seize the assets because of a lack of evidence.

The new Unexplained Wealth Orders are an attempt to force the owners to disclose their wealth.

If a suspected corrupt foreign official, or their family, cannot show a legitimate source for their riches, then the National Crime Agency can apply to the High Court to seize the property.