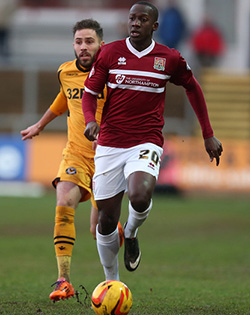 VANARAMA Natiomal League South club Hemel Hempstead Town have now signed David Moyo.
A young, dynamic and exciting striker who played last season in the National League North with Brackley Town, Moyo started his career as a professional with Northampton Town.
It was with the Cobblers that the Hemel management first became aware of him and have tracked his progress ever since.
Following loan spells with the liked of Stamford AFC and Corby Town, Zimbabwe-born Moyo joined Brackley in 2015 where he enjoyed an FA Cup run, notably against Gillingham, and now joins former team-mate Laurie Walker in a move down the M1.Advertisement