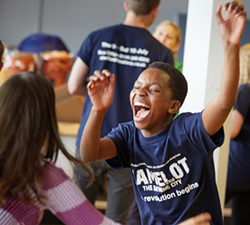 A SHEFFIELD school student has found himself at the centre of a revolutionary movement taking over city streets.
Dean Sibanda is part of the huge community cast of almost 150 in Camelot: The Shining City at the Crucible.
Well, it starts at the Crucible, at least. The action soon spills out into the city centre with plenty of spectacular special effects dreamt up by theatre company Slung Low.
They are working alongside Sheffield People’s Theatre, the community part of Sheffield Theatres, for their most ambitious production yet.
The show is an updated version of the King Arthur myth, with a feisty young woman leading a revolutionary movement that faces a challenge from fervent believers in a faith.
13-year-old Dean, who goes to Firth Park Academy, is one of the younger members of the cast.
He is making his debut at the Crucible in this show after spotting a poster about the auditions at school.
Dean is originally from Zimbabwe and moved to Sheffield when he was six with his mum and little brother.
He remembers Africa as a beautiful place but feels that he is now very much a Sheffielder.
He said: “I used to do school plays and stuff like that to build up my confidence.
“I thought I’d try different kinds of stuff to see what I’m good at. I just fell into drama and really enjoyed it.”
He appears in the show as a student in a pageant scene. He said: “I think it’s really amazing. Doing the stuff that we do is really life changing in a way.”
Dean has now set his sights on becoming a professional actor and says he would love to appear in Billy Elliott. One of his favourite actors is Jurassic World star Chris Pratt.
He said that people should see the show “to experience something new in Sheffield, different from the sort of shows that usually go on, and to see ordinary people from Sheffield doing a show.
“It gives an opportunity to kids like me to do what you dream to do. Nobody is stopping you.”
The full version of this article was originally published by The Star.Advertisement