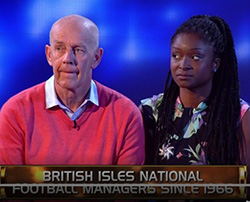 UK: A fashion designer from Welwyn Garden City has been seen on national television using her general knowledge to win thousands of pounds.
Chiedza “Chi” St Francis, who told presenter Nick Knowles she shared a house with her partner Dave Ballard, her sister, and her brother, appeared on Who Dares Wins on BBC One on Saturday evening.
The 32-year-old former pupil of Monks Walk and Harwood Hill schools explained as the programme started: “I am actually in the middle of starting up as fashion label, It is going to be sustainable and ethical.”
Paired with Chris Cotton, a retired teacher from Birmingham she had never met before, she competed against another couple, knocking them out in a best-of-three general knowledge challenge.
She then sealed the shared £5,000 win by naming American Sniper as one of the films of actor Bradley Cooper – an inspired guess as she had never seen it.
Chris and Chi had a second chance to win money later in the programme, but failed to add to their winnings, as she incorrectly named Lesotho as one of the 50 smallest countries in the world.
Chi, who lives in the Haldens area, told the Welwyn Hatfield Times: “Actually it is the 57th smallest country, but I am glad I said it first not last. I was really hoping to win the £50,000 [jackpot], but £5,000 is a step along the way.”
The programme was recorded in May, 2016, but her share of the prize was held back until the broadcast.
She plans to invest it in her business, which will be launched in April under the name Althea King.
She added: “It was amazing. We all got on so well.”
Not only has she stayed in touch with Chris, but she even went to his wedding in September.
Chi was born in Zimbabwe, but came to Welwyn Garden City at the age of five, when her mother got a nursing job at the QEII Hospital.
When she was eight, the Welwyn Hatfield Times reported a narrow brush with death.
Returning from a night shift one morning, the QEII nurse found her three children unconscious in bed, suffering from carbon-monoxide poisoning, but took prompt action to save them.Advertisement