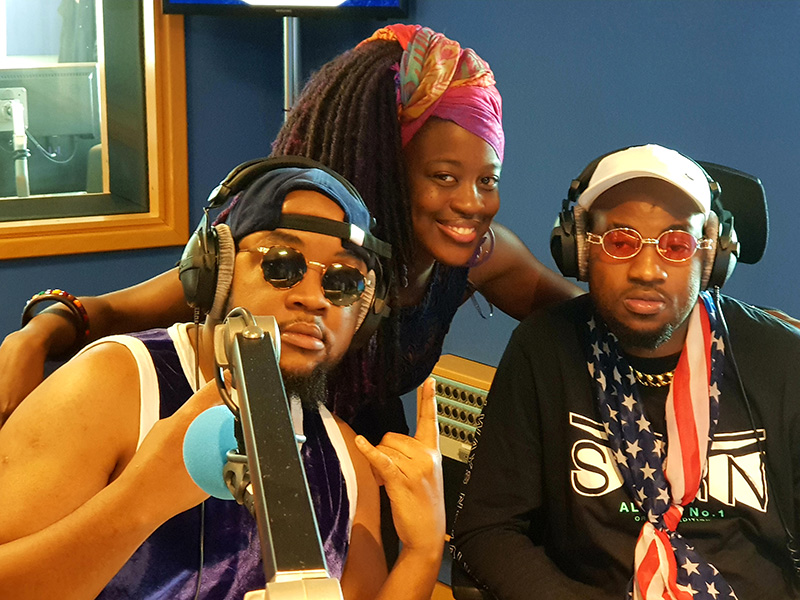 Released nearly a year after the duo changed music direction, the Vosho teaser created an infectious buzz, with just under 52k views in the days that led to its debut release on VEVO.

The summer single was inspired by the popular South African dance move of the same name.

Made up of brothers, Steve “Pro tha God” Manjelo and Shane “Sugar Shane Wabantwana” Manjelo, Blackdiamond first came onto the scene in 2007.

“Vosho, as the name suggests, is about a dance phenomenon that has become quite electric in southern Africa at the moment,” said Pro.

“When the dance first became popular, we were known for executing it well, so much to the point, that a lady who wanted to book us for one of her events referred to us as the “boys of the Vosho”, which was rather amusing and inspired what has become a very popular single,” added Pro.

Last year the double act, who were recently nominated for two awards – music artist and music video of the year – at the recently held Zimbabwe Achievers Awards, decided they were ready for a change musically, wanting to diversify and tap into a new market.

It was at this point that they thought that gqom music had the potential to be the next big thing for them.

Gqom, a sub-genre of house music, originated in Durban and has been popularised by well-known acts that include the Distruction Boyz and Babes Wodumo.

“Gqom wasn’t typically a genre or direction we thought we would take initially but, we knew we wanted a new sound and when we started to put our album together, we realised that we were onto something and have not looked back since,” said Shane.

“I think we are in a place where we can confidently say that, as far a music is concerned, it is Africa’s time to shine and Pro and I are continually working hard to bring a new, edgy sound and something eclectic to the table,” he added.

Speaking on the video concept, the boys said they wanted to convey something that was unique, meticulously laid out, full of quality and represented their creativity.

Shot in 4K resolution, the video was filmed in a Victorian style mansion in the heart of Derbyshire, featuring in most parts, the Vosho dance.

Pro said that prior to the release of the music video, the song had done very well on all digital platforms and it was important for them to deliver a quality video that would keep the momentum going and reflect what the brand is trying to create.

The boys have also announced that they are under new management, adding that PR and Communications expert, Tidi Kwidini would be overseeing their artistic and brand development, as well as working closely with them to create strategic opportunities and value for their brand.

“We first worked with Tidi early last year on our Lahlu’mlenze campaign and we were impressed by how well she understood what we want and where we want to go. As a result, it only made sense to bring her into the fold because together we can create a force to be reckoned with,” said Pro.

A champion of business and community engagement initiatives, Tidi serves as publicist for several organisations, including the Zimbabwe Achievers Awards.

“Blackdiamond are a multi-talented team who have a clear vision, sheer determination and know exactly what outcomes they want.

“We understand our strong-suits and what we’re really great at. There is still a lot to achieve but one thing we are certain of is, we are ready to grow,” Tidi said.

The duo, who recently supported the Distruction Boyz in Birmingham on their UK tour are planning a City 2 City circuit and they are also putting plans in place to host an intimate music festival in the coming months.

Gqom Life is available from all major digital stores, including Amazon and ITunes.