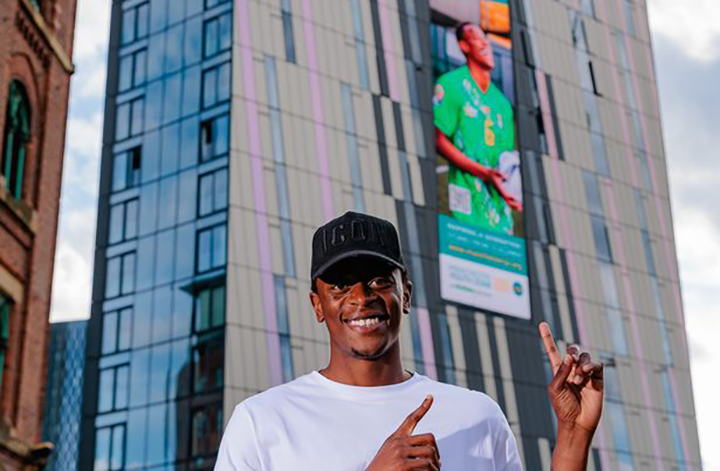 The faces of ten young people who have been helped by Manchester Youth Zone (MYZ ) during the last decade are to shine out on landmark buildings and advertising spaces across the city.

Among the is Zimbabwe Warriors defender Alec Mudimu.

The project is celebrating its tenth year this month – and to mark the milestone they intend to make the young people themselves ‘the stars of the show’. They have worked with local photographer Jody Hartley and creative agency Typocom to create the 10 in 10 campaign, featuring ten young people who have benefitted from joining.

The campaign launched in May at Axis Tower, an unmissable 28 storey residential skyscraper, will feature the 10 in 10 portraits on its digital advertising space.

The ten young people included in the campaign have very different stories on how MYZ has helped them reach where they are today.

They include Mudimu, 27, who grew up in Moston and went to school locally. Football was his passion and aged 16, when MYZ opened he came into the centre to see what was going on.

MYZ became a regular hang out for him and his friends and in the early days it was a meeting point to go somewhere else. More often than not Alec and his friends would be there from when the doors opened to closing time.

As time went on Alec’s football career continued, but he was also inspired by the work of MYZ to take up youth work. Starting as a young leader, he was able to connect his passion for football with a new interest in youth work. He moved quickly from being a young leader through to becoming a paid qualified youth worker at MYZ.

During this period, he travelled to Wales for the football and back to Harpurhey for the youth work sessions. Then, he received a call asking him to play for the national team of Zimbabwe.

He says he had experienced first-hand how staff at MYZ had encouraged and supported him personally with his journey to professional football and was keen to be part of supporting other young people to realise their dreams. However, international football was an offer he could not refuse.

He continues to play for the national team of Zimbabwe and across the globe but welcomed the opportunity to return to the club to be part of the 10th Birthday Celebrations.

He says: “Some of the things the young people go through are so scary such as self harm, abuse and neglect. It has shown me the level of support that they need. I was glad to be part of the project. What it does for young people is indescribable.”

Amanda Naylor OBE , CEO of Manchester Youth Zone added: “We are thrilled to unveil our fantastic campaign at Axis Tower. Property Alliance has come on board as a supporter of Manchester Youth Zone in our tenth year and it is the perfect building to showcase our 10 in 10 campaign in the heart of our city. The young people themselves are what makes the Youth Zone special and so it’s only right that they are the stars of the show.

“We would like to thank the amazing Manchester businesses and individuals who have given their time for free to help this campaign come to fruition, including Jody Hartley, photographer and Typocom.

“Our centre is just three miles outside of Manchester city centre, one of the most prosperous cities in the UK, and yet the outcomes for children in this area is amongst the very worst in the whole country.

“We want to encourage businesses in the city to help us create a level playing field – as we say at Manchester Youth Zone ‘talent is evenly distributed, opportunity is not’. We are here to create that opportunity and the future these young people deserve.

“There has never been a better time to do this as Manchester City Council also launches its work to become a UNICEF child friendly city through its ‘Our Year’ campaign. The awareness campaign aims to encourage local businesses to get involved to help secure the future of this much needed operation.”