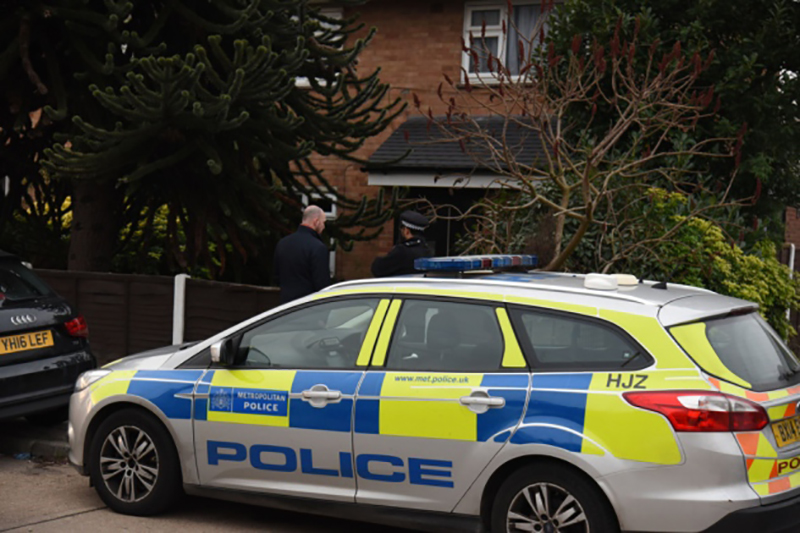 A police vehicle outside the couples home in Rainham, east London
Spread This News

LONDON: A wife was strangled to death by her husband who then hanged himself in their home in what police are treating as a murder-suicide.

Simbiso Aretha Moula, 39, and her husband Garikayi Moula, 51, – both originally from Zimbabwe – were both found dead in their home at their home in Lower Mardyke Avenue, Rainham in east London last Friday.

Officers were called to at the couple’s home at 7.50am and found the cause of Simbiso’s death as compression of the neck while Garikayi’s death was suspension.

Police are treating her death as murder while his death is not being treated as suspicious.

In the aftermath of the tragic incident, a post-mortem examination took place at Queen’s Hospital Mortuary in Romford two days later.

Scotland Yard said they are not looking for anybody else in relation to the deaths.

A Met Police spokesperson said: “Police continue to investigate the deaths of two people at a residential address in Rainham.

“Although formal identification is yet to take police, officers are satisfied that the deceased are Simbiso Aretha Moula, 39, and her husband Garikayi Moula, 51, of Rainham.

“Provisional cause of deaths were confirmed as: Simbiso Aretha Moula – compression of the neck; Garikayi Moula – suspension.

“Officers were called to the couple’s home in Lower Mardyke Avenue, Rainham by London Ambulance Service at 7.50am on Friday after Mr and Mrs Moula were found deceased.

“Next of kin have been informed and are being supported by officers. Nobody else is sought in connection with their deaths.

“Detectives from the Met’s Homicide and Major Crime Command are investigating.

Detective Chief Inspector Paul Considine said: “I would like to thank those members of the public with whom we have spoken as part of our inquiry thus far.

“We are ensuring that next of kin are being fully supported at this most difficult of times.

“If you heard or saw anything at the address that seemed out of place or of concern between the hours of 10.30pm on Thursday, 3 January, and 8.00am the following day, please don’t hesitate to contact us.”