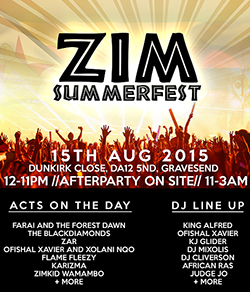 FORTY Zimbabwean musicians will this August take to the stage at the inaugural Zimbabwean Music Festival in the United Kingdom.
The music festival, a brainchild of the Zimbabwe Summerfest Limited, will be held on August 25 in Gravesend.
Part of the proceeds from the festival will go to Zimbabwean affiliated charities, announcements on specific charities and further business partnerships will be made at the official launch and press conference on June 27 in London.
“From the moment gates open revellers will be welcomed by live music performed by all kinds of diverse talent.
“From underrated Zimbabwean artists in the UK to well-known stalwarts of the music industry, we aim to provide an eclectic and relentless mix and line-up of artists, performers and bands across various genres of music, entertainment and performing arts,” said the organisers in a statement.
The 2015 line-up features top UK acts including the critically acclaimed Afro fusion band Farai and the Forest Dawn as headliner, popular Newschool Zimhop acts such as The Black Diamonds, Karizma and Zimkid Wa Mambo, UK rap sensation Zar and upcoming Zim Dancehall mc Fyah-Bantu, among others.
“Also expect a plethora of the biggest and award winning Djs in the UK to be on the decks fulfilling festival goer’s musical fantasies.
“From the much respected God Father of Zim Dancehall King Alfred, House gurus Ofishal Xavier and Kj Glider, to Mr All White himself Dj Busani Socks, no music lover will feel left out as all musical tastes will be well catered for by our list of over 15 djs,” the organisers said.
The festival will bring together Zimbabweans in the UK to celebrate their diverse culture, unique music and sovereign nation as a whole.
“An opportunity for the sons and daughters of a proud motherland nation to revel in the British summertime weather and cast a nostalgic eye on the sense of community and togetherness they grew accustomed to in Zimbabwe.
“Unity through Rhythm is our main objective and we hope to reach this goal by promoting the unrecognized and undervalued Zimbabwean artists in the UK and general Diaspora,” said the organisers.
Businesses, entrepreneurs and caterers from all over the country are expected to sell and market their distinctive wares.
Advance General Admission tickets for the 2015 festival are available online at www.zimsummerfest.com.Advertisement