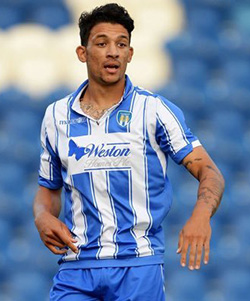 UK: Lincoln City have signed Zimbabwe striker Macauley Bonne on a youth loan from League Two side Colchester United until 26 October.
The 20-year-old’s loan with the National League side runs until his 21st birthday.
Bonne has scored 13 goals in 66 appearances for the U’s, including netting four times in an FA Cup first-round win over Wealdstone last season.
Lincoln are currently third in the National League with 12 points from their first seven matches.
City boss Danny Cowley is known to be a fan of the 20-year-old and has been tracking his progress through the ranks.
“Macauley is someone we know very well,” said Cowley. “He’s already played almost 70 games in League One and has scored goals. There aren’t many 20-year-olds who have done that.
“We are really pleased to bring him to the club. It is a fantastic signing for us, there were two or three Football League clubs trying to get him, so we are delighted he chose to come here.
“We have tried to sign Macauley on numerous occasions but, for one reason or another, have never been able to get a deal over the line.”
Macauley progressed through the youth ranks at home town club Ipswich Town and served his scholarship at Colchester, where he was prolific enough for their youth team to earn himself a first team call-up whilst still only 17.
Handed the vacant number 29 squad number, Bonne’s loan with Lincoln City will run initially until October 26, the day he turns 21 years of age, however, the player could be at Lincoln City for a bit longer.
The loan is potentially until January,” said Cowley. “There is an initial 60-day period in which there is no call-back, but when the player turns 21, the deal changes to an emergency loan and could possibly run until next January.
“He has a lot of attributes and we think he will go on and have a very good career in the Football League. We think we can help him accelerate that pathway and if we can, it will help both Macauley and this football club.” Advertisement