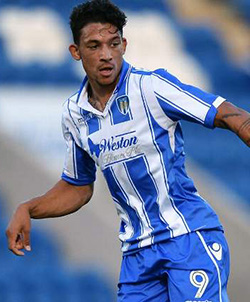 UK: Vanarama National League new boys Leyton Orient have confirmed the signing of Zimbabwean striker Macauley Bonne from Colchester United for an undisclosed fee.
The 21-year-old becomes the latest addition to arrive in E10, and has agreed a two-year deal at the Matchroom Stadium.
Bonne, who started out at Ipswich Town’s academy and enjoyed a brief spell at Norwich City before joining Colchester at the age of 14, came through the ranks with the Essex outfit and went on to make his professional debut as a substitute at Shrewsbury Town in October 2013.
Bonne then had an 18th birthday to remember four days later, as he marked his home debut with the winning goal in a 1-0 victory against Peterborough United.
Having introduced himself to the U’s fans in spectacular fashion, the forward went on to make a total of eighty-four appearances during his time at the Weston Homes Community Stadium.
Bonne, who has been capped by Zimbabwe at under-23 level, also needs no introduction to the National League having enjoyed loan spells at both Lincoln City and Woking last season.
Colchester`s director of football Tony Humes told his club`s official website: “Sometimes, you have to be fair to a player and let him move on to pastures new, we do have a duty of care to all our young players coming through the system.
“Macca has found it difficult to cement a regular place in the first team and we felt it was probably the best thing for him to try and galvanise his career elsewhere.
“This happens across the football world and we ourselves have benefitted from the performances of the likes of Gavin Massey and George Moncur coming here after finding the path to first-team football tough at their previous club.
“Whilst it didn’t quite work out here for Macca, we all thank him for all his efforts in his time here and wish him well in his future career”.
Bonne struggled for starts under boss John McGreal last season and spent time on loan in the National League with both Lincoln City and Woking.
In total, Bonne made 82 appearances for the U’s, scoring 16 goals.
Ironically, Bonne’s final goal for the U’s came in their 3-1 win at Orient, in their penultimate game of last season.Advertisement