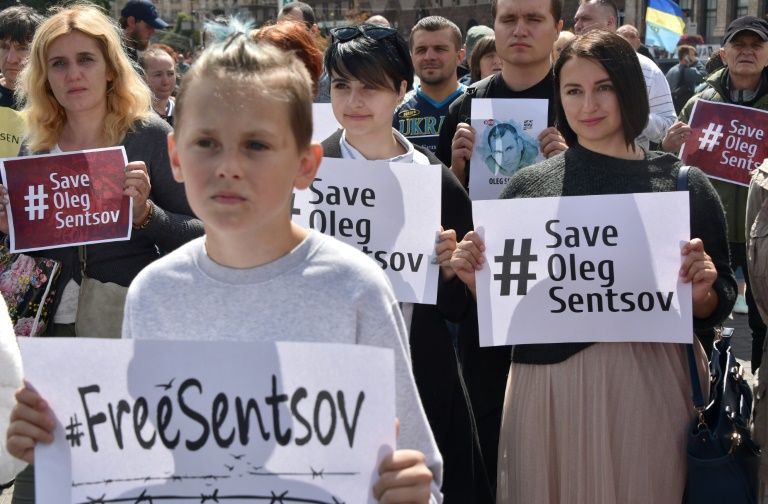 Ukrainian filmmaker Oleg Sentsov was in “serious” condition Monday on the 50th day of his hunger strike in a Russian jail, his lawyer said, as supporters called rallies for his release.

Sentsov has refused food since May 14 to demand Moscow release all Ukrainian political prisoners.

A pro-Ukrainian activist and documentary director, he timed his protest to coincide with the month-long football World Cup in Russia.

“Of course his condition is very serious,” his lawyer Dmitry Dinze told AFP in a phone interview Monday.

Supporters of the 41-year-old director called online for a rally in central Kiev on Monday evening. Supporters had rallied on Sunday bearing signs and a banner reading “Free Oleg Sentsov.”

Sentsov was detained in Crimea in 2014, accused of masterminding arson attacks, after Russia annexed the peninsula.

He denied the allegations but was convicted of terrorism and is serving a 20-year sentence in Russia’s far north.

He said then that the filmmaker’s kidneys had started failing and he had started receiving a drip.

“He has no contact with the outside world, I can’t speak to him on the phone,” Dinze said Monday.

He said he expected to hear more details about Sentsov’s health when the filmmaker’s sister visits the prison “in the near future”.

The vice speaker of Ukraine’s parliament Irina Gerashchenko published the names of 23 Russian prisoners whom she said the government was willing to exchange for Sentsov and other Ukrainian detainees.

“I call on the Russian Federation, take your (people back) and give us back the Ukrainians,” she said.

But Dinze said the information about the 23 Russian prisoners is “nothing new” and that only Russian President Vladimir Putin can decide Sentsov’s fate.

Prominent figures from Russia and abroad have called for Sentsov’s release, including US author Stephen King and Oscar-nominated director Andrei Zvyagintsev.