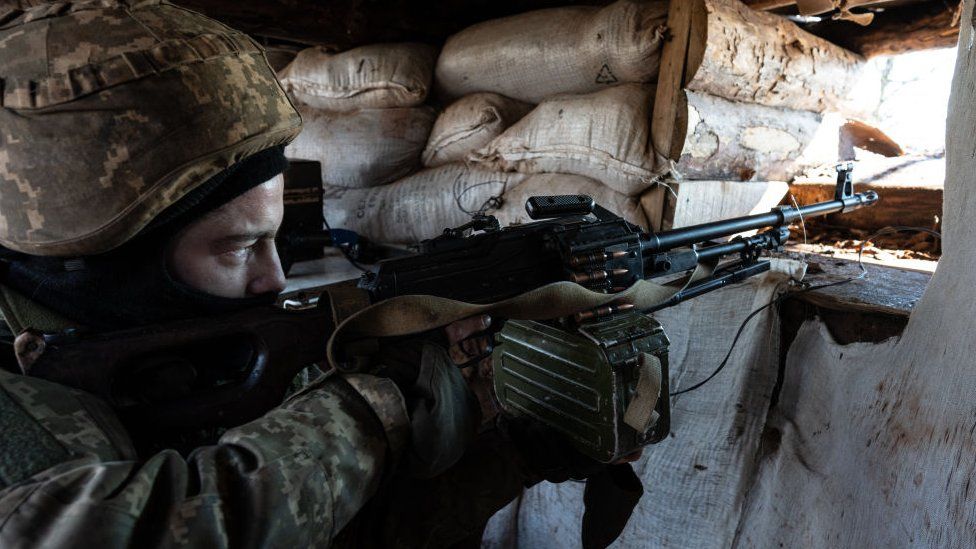 UKRAINE has called for a meeting with Russia and other members of a key European security group over the escalating tensions on its border.

He said the “next step” was requesting a meeting within the next 48 hours for “transparency” about Russia’s plans.

Russia has denied any plans to invade Ukraine despite the build-up of some 100,000 soldiers on Ukraine’s borders.

But some Western nations have warned that Russia is preparing for military action, with the US saying Moscow could begin with aerial bombardments “at any time”.

More than a dozen nations have urged their citizens to leave Ukraine, and some have pulled embassy staff from the capital. CBS News reported that the US is preparing to withdraw all its personnel from Kiev within the next 48 hours, citing three sources.

Kuleba said Ukraine had, on Friday, demanded answers from Russia about their intentions under the rules of the Vienna Document, an agreement about security issues adopted by the members of the Organisation for Security and Cooperation in Europe (OSCE), which includes Russia.

“If Russia is serious when it talks about the indivisibility of security in the OSCE space, it must fulfil its commitment to military transparency in order to de-escalate tensions and enhance security for all,” he said.

However, Ukraine’s President Volodymyr Zelensky, who criticised the “panic” that could spread from such claims, said he had seen no proof that Russia was planning an invasion in the coming days.

On Sunday, he spoke for nearly an hour by phone with US President Joe Biden. The White House said President Biden had reiterated US support for Ukraine, and that both leaders had agreed on “the importance of continuing to pursue diplomacy and deterrence”.

Ukraine’s statement of the call said its president thanked the US for its “unwavering support” and that, at the end, President Zelensky invited the US leader to come to Ukraine. There has been no comment on the invite from the White House.

An hour-long call between President Biden and Russian leader Vladimir Putin the day before failed to yield a breakthrough.

Western allies have previously made clear one of Russia’s key demands – that Ukraine is never be allowed to join the Nato military alliance – is not up for debate, saying the alliance’s door must remain open to new members.

But Ukraine’s ambassador in London, Vadym Prystaiko, has told the BBC his country might be willing to drop its ambition to join Nato to avert war, saying Ukraine could be “flexible”.

Asked if Kiyv was considering shelving its plans to pursue Nato membership, despite it being written into the Ukrainian constitution, he replied: “We might – especially being threatened like that, blackmailed by that, and pushed to it.”

In the latest attempt to find a diplomatic solution, German Chancellor Olaf Scholz has meetings scheduled with President Zelensky in Kyiv on Monday and with President Putin in Moscow on Tuesday.

The chancellor, who took over the leadership of Germany from Angela Merkel in December, has warned of severe economic consequences for Russia if it should launch any invasion, echoing statements by other Western nations and members of the Nato military alliance.

But Berlin officials have downplayed any expectation of a breakthrough.

Meanwhile, UK Prime Minister Boris Johnson plans to hold fresh diplomatic talks across Europe to bring Russia “back from the brink” of war.

Sullivan said the US is closely monitoring for a potential “false flag” operation by Moscow as a pretext for a full-scale invasion so it can claim it is responding to Ukrainian aggression.

Russia contends that its build-up of troops along the Ukraine border is its own concern, within its own territory. On Sunday, senior foreign policy official Yuri Ushakov characterised the US warnings of imminent invasion as “hysteria has reached its peak”.