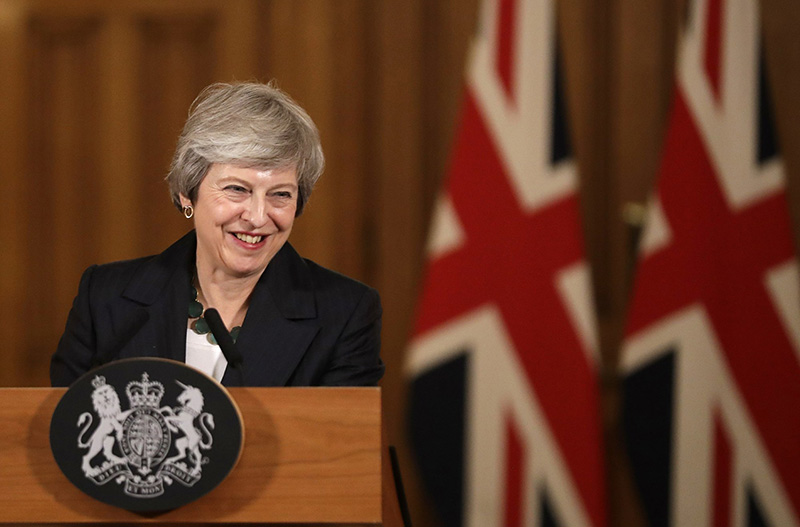 LONDON: British Prime Minister Theresa May appealed directly to voters to back her Brexit plan Friday as she braced for a potential leadership challenge from rivals within her party.

May answered questions from callers on a radio phone-in, the day after she vowed to stay in office and see through Britain’s exit from the European Union.

It was not an easy ride. One caller said May should resign and let a more staunchly pro-Brexit politician take over; another compared her to Neville Chamberlain, the 1930s prime minister who vainly tried to appease Nazi Germany to avoid a war.

May stood by her plan.

“For a lot of people who voted ‘leave,’ what they wanted to do was make sure that decisions on things like who can come into this country would be taken by us here in the U.K., and not by Brussels, and that’s exactly what the deal I’ve negotiated delivers,” she said.

May is battling to save her Brexit plan, and her job, after the draft withdrawal agreement between Britain and the EU sparked fierce opposition from euroskeptic politicians in her Conservative Party. They say the agreement, which calls for close trade ties between the U.K. and the bloc, would leave Britain a vassal state, bound to EU rules it has no say in making.

Several Conservative lawmakers are pushing for a no-confidence vote, hoping to reach a threshold of 48 to trigger a challenge. If May lost her job as party leader, she would also lose her position as prime minister.

Sky News reported Friday that all Conservative whips had been summoned to London, amid rumours that 48 letters had been submitted.

May got one piece of good news, when Environment Secretary Michael Gove decided not to follow two Cabinet colleagues and quit over the divorce deal.

Brexit Secretary Dominic Raab and Work and Pensions Secretary Esther McVey quit Thursday, saying they could not support the agreement. Like them, Gove was a strong supporter of the “leave” campaign in Britain’s 2016 EU membership referendum.

Gove said Friday that he “absolutely” had confidence in May, adding that he would work with government colleagues to achieve “the best future for Britain.” But he did not answer when asked if he supported May’s Brexit deal.

A defiant May vowed Thursday to “see this through,” and said abandoning her Brexit plan, with Britain’s exit just over four months away on March 29, would plunge the country into “deep and grave uncertainty.

The political turmoil prompted a big fall in the value of the pound. On Friday it recouped some gains, trading 0.4 percent higher at $1.2821, partly on relief that Gove didn’t join the others in quitting the government.

But investors and businesses remain worried about the prospect of Britain crashing out of the EU in March without a deal. That could see tariffs on British exports, border checks, restrictions on travellers and workers and interruption to the supply of goods.

Simon Kempton of police officers’ union the Police Federation said a “no-deal” Brexit could spark protests, and “it’s a real concern that those protests might escalate into disorder.”

“It’s 2018. It’s the year that people dial (emergency number) 999 because KFC ran out of chicken,” he told Sky News. “If that will happen, imagine what will happen if we start seeing food or medical supply shortages.”

EU leaders, who have called a Nov. 25 summit in Brussels to sign off on the draft agreement, were doing their best to refrain from commenting on Britain’s political chaos.

But French Finance Minister Bruno Le Maire on Friday called some British politicians “liars” who fooled voters into thinking leaving the EU would be easy and in their interests.

“The truth is that Brexit could end with a nightmare,” he said at a conference in Paris on reforming the global trade system.