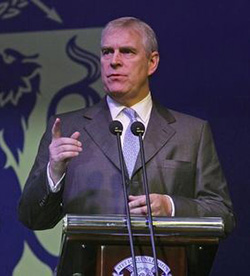 BUCKINGHAM Palace stepped up its denial that Prince Andrew had sex with an underage girl and named the alleged victim who had sought to preserve her anonymity, according to British newspaper reports on Sunday.
Buckingham Palace had already denied on Friday allegations made in Florida court documents by the woman, who said she was forced as a minor to have sex with Prince Andrew, the second son of Queen Elizabeth, as well as with other figures linked to a disgraced U.S. financier.
The woman, referred to as “Jane Doe #3” in a court filing this week in the U.S. Southern District of Florida, said financier Jeffrey Epstein made her have sex with the Duke of York in London, New York and on a private Caribbean island, as part of “an orgy with numerous other underaged girls”.
Epstein was convicted on state child sex charges in the United States. The woman’s filing is part of a civil case brought against the U.S. government that dates back to 2008 and argues that the rights of several women who say they were victims of Epstein were harmed in the negotiation of a plea deal for him.
On Saturday, some British newspapers published an old photograph of Andrew holding the waist of the woman, then aged 17. On Sunday, two newspapers reported Buckingham Palace had issued a more explicit denial of wrong-doing.
“It is emphatically denied that HRH The Duke of York had any form of sexual contact or relationship with Virginia Roberts. The allegations made are false and without any foundation,” a spokesman for Buckingham Palace was quoted as saying by the Telegraph and Mirror newspapers.
Previously, Buckingham Palace had not named Roberts. On Friday it said “any suggestion of impropriety with underage minors is categorically untrue”.
A spokesman for the palace did not immediately respond to requests for comment from Reuters. While the age of consent is 16 in Britain, it is 18 in much of the United States.
People making a criminal complaint of rape in England have a legal right to anonymity unless they choose to waive it.
The lawyers representing Roberts could not be immediately reached for comment.Advertisement