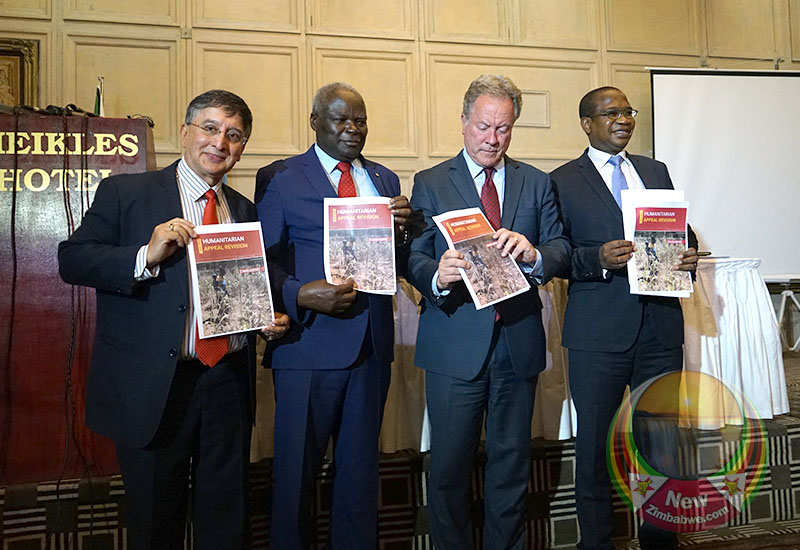 THE United Nations Tuesday launched a US$331.5 million international aid appeal to help Zimbabwe tackle a drought which has left a third of its population in need of relief over the next nine months.

Presenting the appeal to government officials and the diplomatic corps, UN ambassador Bishow Parajuli said the total requirement needed to address the humanitarian situation between July 2019 to April 2020 would be US$331.5 million.

“The total requirement to address the humanitarian needs of these 3.7 million people by the international humanitarian community between the period July 2019 to April 2020 is approximately USD 331.5 million,” he said.

Furthermore, the Integrated Food Security Phase Classification (IPC) analysis points to over 3 million people (estimated at 38%) of the rural population are projected to be in need of urgent humanitarian support between the period October to December 2019.

The Ministry of Public Service, Labour and Social Welfare estimated up to 2.2 million people in urban areas are food insecure.

“Recognising that the urban communities are most market reliant and susceptible to affordability issues, the Ministry of Public Service, Labour and Social Welfare estimates that up to 2.2 million people in urban areas are food insecure. An urban vulnerability assessment is currently ongoing, whose findings and recommendations will further inform urban humanitarian actions,” he added.

Parajuli further gave an update on the Cyclone idai relief.

The tropical cyclone ravaged the south-eastern Africa was described as one of the worst disasters ever to strike the southern hemisphere, with up to 2,6m people potentially affected in the Eastern parts of Zimbabwe, Mozambique and Malawi.

“Cyclone Idai, which struck eastern parts of the country in March this year, affected 270,000 people and left 50,000 people displaced.

“While significant efforts have been undertaken to respond to the impact of the cyclone, some of the affected households still require humanitarian assistance, particularly the internally displaced persons in temporary sites, those living with host families and those who lost everything,” he added.

He further said the early recovery and resilience building needs of the cyclone-affected communities have been identified and are being addressed by the Government and partners, with the support from the World Bank and the African Development Bank.

The Early Recovery Sector which was led by the UNDP developed a multi-sectoral Early Recovery Plan for a total of USD 69 million in support Government efforts.