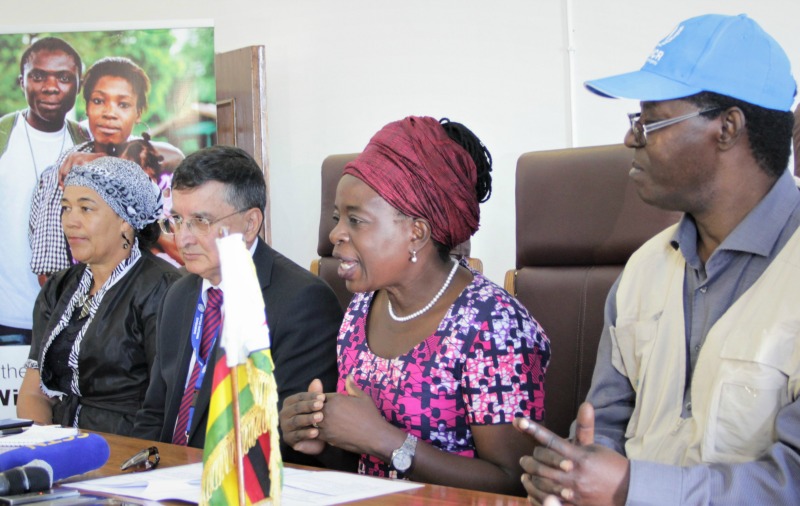 Minister Nzenza at a media briefing
Spread This News

THE United Nations High Commissioner for Refugees (UNHCR) Sunday handed over to government, 80 metric tonnes of relief items set to benefit 10 000 survivors of the recent Cyclone Idai that killed early 200 and left many in need of all forms of assistance.

Donated goods, which were received by Public Service Minister Sekai Nzenza at the Robert Gabriel Mugabe International airport on Sunday, were transported into the country on a cargo plane through assistance by Princess Haya of United Arab Emirate (UAE).

Without her assistance, according to UNHCR officials, the goods would have been shipped through the sea and will have taken weeks to arrive.

UNHCR Country Representative Robert Tibagwa said while handing over the goods that he wished the gathering at the airport was occasioned by happier circumstances.

“How I wish we were congregated here in better circumstances. Zimbabwe has really been badly affected by the cyclone and this is one small way of contribution from the UN family to the people and government of Zimbabwe,” Tibagwa said.

“We know that the needs are great; we will do our best to even assist with more but for now we have 80 tonnes with jerry cans, medical supplies and many other things to respond to the difficulties that my sisters and brothers in Zimbabwe are facing.

“The devastating cyclone has left people in dire need of humanitarian support.

“UNHCR supplies will help provide shelter and basic items to survivors, including women and children as they have lost everything.”

UNHCR is part of humanitarian team working in close collaboration with the Government of Zimbabwe and other humanitarian partners to ensure people receive the required assistance and are also protected from risks associated with the disaster.

UNHCR has also deployed a team of emergency experts to support relief efforts.

In Zimbabwe, it has been reported that Tropical Cyclone Idai has displaced an estimated 90,000 people in nine districts mainly in the eastern highlands part of the country.

The cyclone has reportedly killed over 200, with some 300 still missing and has affected 270,000 people.

Vulnerable people, including women and children are at risk and in need of relief and recovery support.

About 95 per cent of the infrastructure, including schools, roads and bridges has been damaged in Chimanimani districts.