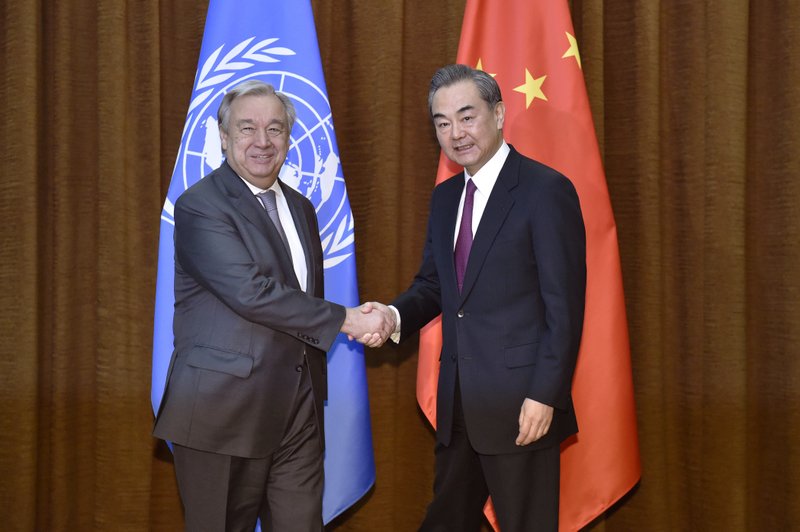 The U.N. secretary-general and the Singaporean foreign minister voiced concerns about global trade tensions and rising protectionism during back-to-back meetings in Beijing on Sunday.

“This is a time in the world where the temptation to embark on unilateralism and protectionism is unfortunately rising,” Balakrishnan said.

“You mentioned reform and opening up – it’s so important in a moment when some others have a policy of closing up,” Guterres told Chinese Foreign Minister Wang Yi.

“The solutions for these problems are not to put globalization to question, but to improve globalization. Not isolation or protectionism, but more international cooperation,” Guterres said.

The comments came as China and the U.S. exchanged escalating tariff threats in what is already shaping up to be the biggest trade battle for more than a half century.

Beijing vowed Friday to “counterattack with great strength” if President Donald Trump follows through on threats to impose tariffs on an additional $100 billion in Chinese goods.

Trump’s announcement followed China’s decision to tax $50 billion in American products, including soybeans and small aircraft, in response to a U.S. move this week to impose tariffs on $50 billion in Chinese goods.

The U.S. bought more than $500 billion in goods from China last year and now is planning or considering penalties on some $150 billion of those imports. The U.S. sold about $130 billion in goods to China in 2017 and faces a potentially devastating hit to its market there if China responds in kind.

In the meetings, Wang attacked what he called “protectionism and unilateralism,” though he didn’t single out the U.S. by name.

“China will safeguard the principles of free trade and oppose protectionism,” Wang said. “We should push forward with economic globalization.”

Wang was welcoming both officials ahead of their planned appearances at the annual Boao Forum for Asia, a Chinese-sponsored annual gathering for political and economic elites on tropical Hainan Island.

Balakrishnan is traveling with Singaporean Prime Minister Lee Hsien Loong on the first of a five-day visit to China.