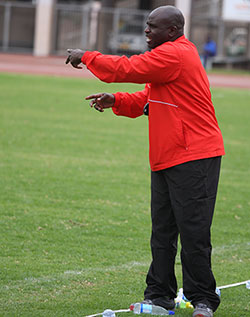 THE Castle Lager Premier Soccer League action starts this Thursday with Hwange hosting ZPC Kariba at the Colliery Stadium – a game the coal miners need to win at all costs after two losses on the trot.
ZPC are unbeaten in 13 starts in their debut season, but have been undone by nine draws in their campaign and face their toughest game outside Harare this season.
Hwange are fourth on the table with 22 points and a win will take them to the top ahead of Highlanders, who have 24 points before the action continues from Saturday to Monday.
On Saturday, Caps United travel to Bulawayo for a date with Chicken Inn hoping to exorcise their away demons where they have picked up just three points from a possible 18.
FC Platinum make the short trip from Zvishavane to Gweru for a date with Chapungu at Ascot while Harare City are away to bottom-placed Chiredzi FC.
The Chiredzi match will hog all the limelight after coach, Moses Chunga, was fired on Monday for a string of poor results, insubordination and running parallel structures in Harare.
Chunga, who is holed up in Harare, maintains he is still in charge, but the club has moved to appoint Dzingai Murinye and Tinashe Zvishiri as caretaker coaches.
The pair conducted their first training session on Tuesday and will be eager to add to City’s woes.
City have been struggling since the start of the season due to their own in-house problems which eventually saw chairman Leslie Gwindi being relieved of his duties although, like Chunga, he has stated that he remains in charge.
Of particular interest this weekend is how the two teams will cope in the absence of their head coaches who are attending a CAF C Licence course in Harare and are expected to be in class until next Friday.
FIXTURES
Thursday: Hwange v ZPC Kariba (Colliery, SS9)
Saturday: Chicken Inn v Caps United (Luveve, SS9), Chiredzi v Harare City (Chishamiso), Chapungu v FC Platinum (Ascot).
Sunday: How Mine v Highlanders (Barbourfields, SS9), Shabanie Mine v Buffaloes (Maglas), Dynamos v Black Rhinos (Nationals Sports Stadium).
Monday: Bantu Rovers v Triangle United (Luveve)