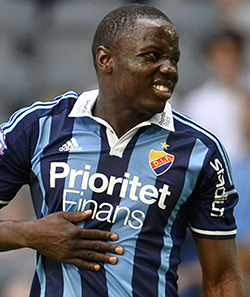 SWEDEN based Zimbabwean striker Nyasha Mushekwi says the uncertainty surrounding his future is affecting his game as he has now dropped to third position on the goal scoring charts.
Last spring Mushekwi set Swedish league alight with his prolific goal scoring form and led the Allsvenskan top scorer on ten goals scored.
After the break he managed only one goal in the last seven matches.
The Zimbabwean has not scored since July 13 as he appears to struggle to regain his form and is now in third positon with 11 goals two behind the leading goal scorers.
One factor that influenced the attacker is that he does not know if he will remain in Djurgården or whether there may be a new club for the star, who is on loan from South African club Mamelodi Sundowns.
He confirmed to Swedish publication Matchdax that speculation about his future is affecting him.
“I am a professional player but uncertainty is surely affecting my game.  I have no agent, and I’ll do the negotiating myself.
“What happens, I do not know but I think it’s gonna be in the next week,” said Mushekwi.

The Zimbabwean appears to suggest he has not received any proposals despite reported interest from European clubs and Egyptian club Zamalek.
“No, I have not received any proposal at all.
“It is only ten rounds left and I hope I get to play the course in Djurgarden and it would be silly to break up something now, to start a new season with only ten matches remaining,” Mushekwi is quoted saying.
According to the South African club’s spokesman, the loan will be extended by Djurgården, yet reports suggest that Zamalek are interested in the attacker’s services.Advertisement