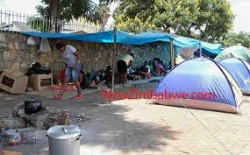 THE Grain Marketing Board (GMB) has taken its former workers to court for camping at the Head Office in Harare as the parastatal under pressure from the Harare City Council to remove the workers for fear of disease outbreak.
Police have not intervened on the matter.
GMB Public Relations officer, Joseph Katete, told ZBC on Wednesday, the company was seeking an urgent court order to have the former workers removed from its premises.
Out of more than 1200 workers who lost their jobs last year, around 400 of them have been camping at the GMB offices for 23 days.
The city council has also indicated that it will file papers to have the former GMB workers removed by force.
In an interview with New Zimbabwe, Harare City Council Acting Corporate Affairs Manager, Michael Chideme, expressed concern over the issue between the GMB management and its workers urging the two to resolve their problems immediately.
“We would want to encourage the two feuding parties to solve their issue because the former workers who are camping are regarded as squatters and as such, the Council will seek permission to remove them by force,” Chideme said.
The municipality’s Health Director, Prosper Chonzi, said the situation has to be resolved as it is a health time bomb. She said there were fears of an outbreak of disease(s) if the former workers continued staying there without ablution facilities and water.
GMB owes its former workers and those still employed more than $4.7 million in net salary arrears and the parastatal is broke with no solution in site.
The former workers have vowed to stay put and have also engaged lawyers through some sympathetic Human Rights organisations.