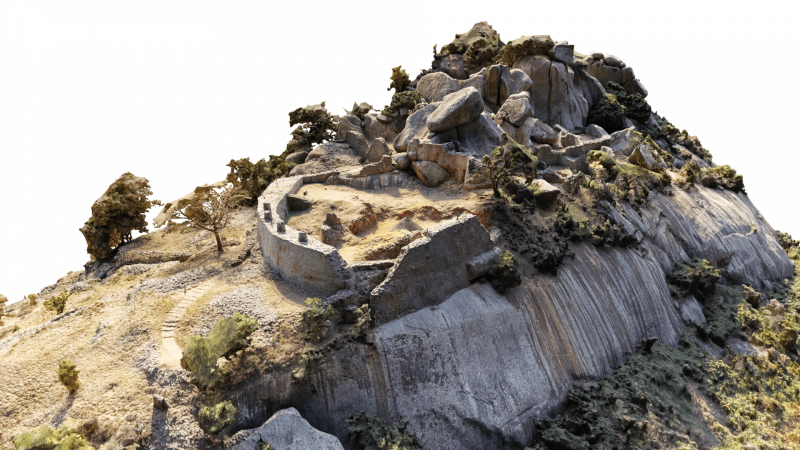 The Hill Complex, the estate’s highest point, was the earliest of the prominent areas settled by Great Zimbabwe’s religious and political leaders
Spread This News

The state covered 1,779 acres, more than twice the area of New York’s Central Park. UNESCO, the un’s cultural body, declared it a world heritage site in 1986.

At independence in 1980 Robert Mugabe renamed Rhodesia Zimbabwe (roughly “house of stone”) after the site.

Yet it is far less visited, or understood, than Machu Picchu, say, or Egypt’s pyramids. One scholar has made it his life’s work to show how Great Zimbabwe was the foremost example of a precolonial sub-Saharan African state.

Shadreck Chirikure was born in 1978, some 60km from Great Zimbabwe in Gutu, a town in eastern Zimbabwe. At school he learned little about the site. His first visit was as a student, aged 22. He has since made up for lost time. A renowned archaeologist, Mr Chirikure is a professor at the University of Cape Town and the University of Oxford. He has worked across Africa. But he is always drawn back home.

That is because, says Mr Chirikure, Great Zimbabwe should be a “symbol”, not just of Africa’s power and potential, but of how outsiders have too often told Africans’ stories—and got them wrong. His work at Great Zimbabwe is revealing new truths about one of the most important places in Africa’s past. In doing so he hopes to overhaul ideas about the continent’s future.

All Rhodes lead to roam

Like many historical sites, Great Zimbabwe is cloaked in myth. Yet few have been shrouded in so many outright lies. After a visit in 1871 Karl Mauch, a German explorer, concluded that the site was too impressive to have been built by Africans. Mauch wondered whether he had found Ophir, the biblical land of riches.

His suspicions were apparently confirmed after he sniffed a lintel. It smelt of Lebanese cedar—rather than, say, the local sandalwood—and so he concluded that materials must have been brought by Phoenicians or Israelites. “A civilised nation must once have lived there,” he wrote. In other words, not a black one.

Mauch’s writing was catnip to colonialists. In 1889 Willi Posselt, another German explorer, bribed a local bigwig and stole one of Great Zimbabwe’s bird carvings which had spiritual importance for the local Shona people. Posselt sold the bird to Cecil Rhodes, who established the British South Africa Company that year to exploit the area north of the Limpopo river.

Rhodes funded trips to Great Zimbabwe for other colonial explorers. In 1891 James T. Bent carried out the first archaeological dig, carelessly. He agreed that the site could not have been the work of local Africans.

Other British archaeologists soon challenged these views. In 1905 David Randall-McIver saw that artefacts at Great Zimbabwe were akin to those still used by Shona. He noted that the Arab and Persian glass beads at the site were from the 14th or 15th centuries, not biblical times. Later research trips, including one of the first female-led excavations anywhere, by Gertrude Caton-Thompson and Kathleen Kenyon, also surmised that Africans built Great Zimbabwe.

Not that the evidence mattered under white rule. Schoolchildren were told that foreigners were behind Great Zimbabwe. Rhodesian soldiers who fought in the colonial wars of conquest were buried at the site. Golf courses were built within its environs. In 1973 Peter Garlake, an iconoclastic white archaeologist, was forced into exile by the Rhodesian government for promoting the African origins of the site.

Today its true origins are universally accepted. But Mr Chirikure argues that the colonial legacy still affects how the state is viewed. Its greatness is seen as a product of its relations with non-African states, he says, rather than its indigenous ways. “How different is that from saying it was colonisers who built it?” he asks. “We have replaced foreigners’ direct influence with their indirect role.” Combining archaeological science and technology with Shona ethnography, Mr Chirikure and colleagues have pieced together a new story about Great Zimbabwe, one that he says no longer “marginalises” those responsible for its majesty.

Items found at Great Zimbabwe have long astonished archaeologists. A Ming dynasty teapot, a Persian pot inscribed with Arabic script, glass from Syria, cowrie shells from the Indian Ocean—all attest to its connection to an international trading network. “It shows how wrong it is to think there was nothing happening in Africa before colonisation,” says Mr Chirikure.

But not many foreign goods have actually been found, points out Mr Chirikure. And pieces like glass beads are scattered across the site, suggesting rulers did not revere them.

By contrast, the eight soapstone birds, on average 40cm high atop a metre-high column, were found mostly in the Hill Complex, the site’s highest point. The birds resemble bateleur or fish eagles, Shona totems, but have human features, so may represent the ancestors of Great Zimbabwe’s leaders.

And exotics from China and elsewhere have meant that “internal African trade is hardly emphasised”. He points to the presence of cross-shaped copper ingots similar to those found in Congo and Zambia today, and metal gongs akin to those found across west and central Africa.

Cattle bones from cows 120km away have been found, suggesting marriages and trade across the region. All these imply that Great Zimbabwe was central to an African network of trade and knowledge.

The remains visible today were the heart of a vibrant city-state. Constellations of polygamous families lived in multigenerational homesteads built from dhaka (a gravel and clay mix). Residents ate grains such as millet and sorghum, as well as beef from cattle.

Some Western scholars believed that major parts of the site reflected separate domains. The Hill Complex was for political and religious leaders; the enclosures in the valley for rulers’ wives; and the Great Enclosures for rituals such as circumcision.

One breathless observer felt the tower in the Great Enclosure must have had phallic connotations. Yet evidence gathered by Mr Chirikure challenges the idea of sexes living separate lives. Pots found with metal residues suggest women made clay crucibles which men used for metalwork.

He notes that the supposedly all-female valleys were the last to be vacated. In an archaeological zinger, he wrote in a paper in 2008 that this timing “raises serious questions regarding why royal men would leave royal wives behind when abandoning the site.”

The idea that certain parts of Great Zimbabwe were always home to rulers reflects what Mr Chirikure says is a common mistake: the tendency to apply Western ideas in African contexts.

For scholars of medieval Europe, it might make sense to think of the Hill Complex as a sort of Edinburgh Castle, occupied by successive generations high on a rocky outcrop. But in Shona culture, where burial sites are spiritual places, which ought not to be disturbed, it makes more sense that a royal homestead would move after a ruler’s death.

Mr Chirikure was the first African to win the Antiquity prize, a prestigious gong. In 2019 he became the first archaeologist to win it twice, with a paper on the dynamic between elites and commoners at Great Zimbabwe.

He noted that there was little difference in the types of objects found in marquee parts of the site and those discovered elsewhere.

That matched his understanding of Shona culture. In maguta, or large settlements, people of shared lineage “had equal access to resources, symbols and power”, he notes.

Those at the top of the hierarchy interacted with those at the bottom more than in medieval Europe. In Great Zimbabwe, Mr Chirikure concludes, class was “very fluid”.

Nor are the high-profile sites everything. Much of Great Zimbabwe remains unexcavated.

When Mr Chirikure dug up the car park used by visiting vehicles—and the monkeys who defecate on them—he found, among other things, thumb pianos, prompting the realisation that the area outside the main walls was populated too.

Scientific dating confirmed that people lived beyond the perimeter well into the 17th century.

This finding has challenged the accepted chronology of Great Zimbabwe. It was seen as the successor state to Mapungubwe, in contemporary South Africa, which dates to 1200-1300. When this state collapsed its inhabitants allegedly left for Great Zimbabwe.

After living there they moved on again (no one knows precisely why), ending up in Khami, from 1400-1650, near what is today the city of Bulawayo in southern Zimbabwe. In Mr Chirikure’s telling, while Great Zimbabwe’s peak may have passed during the 1500s, it was occupied for much longer than commonly assumed.

Archaeology, like many academic disciplines, is under pressure to “decolonise”. To its critics the idea is wokeism run amok, the diluting of intellectual standards for the sake of political correctness.

For Mr Chirikure, decolonising archaeology is not about rejecting academic rigour or centuries of progress in materials science. It is, he argues, about incorporating “local sources of knowledge”. In trying to understand life in Great Zimbabwe, he says that it is better to understand Shona culture, rather than copy and paste ideas based on medieval European kingdoms.

African history remains peripheral and dogged by outdated assumptions partly because of a lack of African perspectives. Just 3% of the papers published in four prestigious history journals from 1997 to 2020 were about Africa. Of these only about 10% were written by authors based in Africa (compared with 86% for America, 76% for Europe and 40% for Asia and Oceania). The more that is written about African history, the more nuanced it is likely to become. The more African scholars do the writing, the more likely it is that the field benefits from new methods and insights.

For Mr Chirikure Great Zimbabwe should be a fillip for those considering Africa’s current development, too. He points to the importance of manufacturing at the site. About half of sub-Saharan African exports are raw materials, which are processed elsewhere.

Mr Chirikure notes that in Great Zimbabwe metalworkers added value to gold, bronze and iron before exporting them. The site’s connections with other African states, he adds, underline the need for more intra-African trade.

Just 17% of Africa’s exports go to other countries on the continent, compared with 68% in Europe and 59% in Asia. Those planning the African Continental Free Trade Area, the early stages of implementation, could do well to remember the Congolese ingots.

“We don’t learn from the past as much as we should,” concludes Mr Chirikure. “Here is a place that was occupied by people who were heavily invested in production, who developed regional links, who were also interacting with other parts of the world—and they built a place with such strength and resilience.”

Great Zimbabwe holds one more lesson for Africa today: the importance of functioning states. Since it took power in 1980, Zanu-pf, the party of Mugabe, has ruled in thuggish and kleptocratic style, immiserating a country with vast potential.

Little has changed since Mugabe was toppled in a coup in 2017. The local currency is in the middle of another devaluation, a result of command-and-control economic policies and rampant corruption.

A Zimbabwean “bond note” was ostensibly worth one American dollar in 2016; today it is worth less than half a cent. Emmerson Mnangagwa, who replaced Mugabe, wants outsiders to think Zimbabwe is “open for business”, but few are fooled.

Power cuts are common. Great Zimbabwe’s museum houses seven of the eight bird statues found on the site (the other is at Rhodes’s house in Cape Town). But in the dark one-room exhibition only the light from a phone, reflecting off the soapstone, was visible.

Perhaps conscious that references to Great Zimbabwe may seem irrelevant to today’s troubles, Mr Chirikure is fond of quoting a Shona saying. Matakadya kare haanyaradzi mwana literally means, “If a child is crying because they are hungry, you cannot tell them to stop because they once ate in the past.”

Yet, when he gazes up at the vast beauty of the wall of the Great Enclosure, or digs in the car park, he cannot help but hope that past glories can still inspire future ones. “It is a reminder of what can be,” he says.