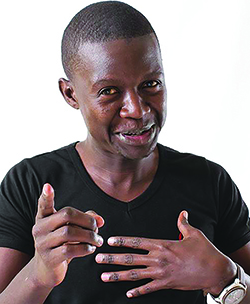 COMEDY lovers are in for an unforgettable stand-up comedy experience at this year’s Intwasa Arts Festival koBulawayo.
The festival runs from September 23 to 27 under the theme unforgettable.
Stand-up comedy has been on the rise in the country in the last few years and has become one of the main attractions in arts festivals throughout the country.
The comedy night to be held on the last day festival will feature some of the country’s leading stand-up performers in Doc Vikela, Babongile and Ntando Van Moyo.
The trio has been in the comedy game for some years and have grown tremendously in their trade, in the process gaining a huge following in the country and beyond.
It will also be a bonus for comedy enthusiasts as the trio are diverse in their delivery and content and are proven rib crackers befitting the stage.
While the three might hog the limelight, two new comedians in Zwe and H.O, who will also take to the stage on the night, might get away with murder, should they fail to impress.
However, they will surely cherish the opportunity to perform at such big stage and will use the experience to grow their trade.
In an interview with NewZimbabwe.com, Ntando Van Moyo, one of the organisers of the show, said the selection of the line-up was inspired by the need to balance comedians from different parts of the country with different styles and audiences.
“We decided to involve comedians from Bulawayo and Harare whom we have worked with in the past. The other reason why we decided to go with these comedians is that they were the only ones available on this particular date,” said Moyo.
“We are promising comedy lovers an unforgettable experience of home grown Zimbabwean comedy.”
This is the second time in its 10-year existence that the festival will host a comedy show and organisers said stand-up comedy could no longer be left out in an arts festival.
“Comedy is one of the fastest growing arts genres in the country and as a festival we could not ignore it,” said Nkululeko Nkala, the festival’s media liaison officer.
“At Intwasa we strive to be an all-encompassing festival making sure that all genres are given a platform so that the different audiences who will come to the festival will not be left out.” Advertisement