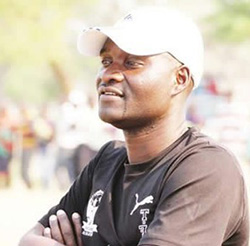 UNHERALDED Tsholotsho striker Simbarashe Gorogodyo emerged the hero with a beautiful goal that proved the sucker punch for Harare City in a Castle Lager Premier Soccer League season opener at Rufaro on Friday.
The 23-year-old striker got to the end of a cross by  Kriess Chitiyo in the 77 minutes to fire past Harare City goalkeeper Tafadzwa Dube.
Harare City controlled the first half but failed to transform their dominance into goals.
They appealed for a penalty after just two minutes when Martin Vengesayi was fouled by Tsholotsho goalkeeper Mariyoni Chang but referee Pedzisai Chadya ignored the call.
Still, the home team continued to probe their opponents with Honey Chimutimunzeve coming close on the 11th and 26th minutes.
Nathan Zini was also denied by Tsholotsho goalkeeper Chang with a spectacular save.
But Thsolotsho had a good opportunity in 37 minutes though but  midfielder Ocient Ncube send his effort over the bar.
City coach Taurai Mangwiro pulled off the ineffective Francesco Zekumbawire on 39 minutes, bringing on William Manondo but still there was no end product in terms of goals.
That appeared to give the visitors confidence as Gorogodyo was soon denied with a brilliant save by Dube from three meters out.
In the second half, Tsholotsho had captain William Stima pulled out after sustaining injury and Donald Dzvinya came on for him.
City however took control of the match at the death as they sought an equalizer but Tsholotsho killed off the match as a contest courtesy of Gorogodyo.
Tsholotsho coach Lizwe Sweswe, who was taking charge of his match in the premiership, was happy with the victory.
“I had the confidence before the match that we would win,” said Lizwe.
“We were huge underdogs going into the match and I had told the boys football is the same; go and express yourselves.
“This team has been together for some time and I am happy with the victory.”
His counterpart Mangwiro was disappointed with the result but remains optimistic they will pick themselves up as the league progresses.
“We were our own worst enemies,” he said.
“We couldn’t impose ourselves on the match and we allowed our opponents to grow in confidence resulting in that sucker punch.
“They were signs of desperation from my team but we will get back on track as we progress.”Advertisement