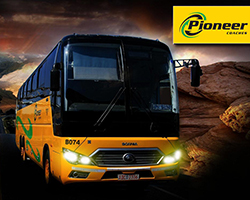 TRANSPORT and logistics group Unifreight Africa says it has completed its restructuring exercise and will now focus on local transport and revised assembly entities.
The group closed its Botswana subsidiary last year and is disposing of Pioneer Transport to its employees through a management takeover.
Pioneer Coaches, a division of Pioneer Transport started trading separately from the group in January and is waiting for a potential buyer to take over.
“The Board resolved that the business of Pioneer Coaches including all its operating assets liabilities and borrowings, currently a division of Pioneer Transport (Private) Limited, be transferred into a separate existing dormant company Pioneer Coaches (Private)Limited,” said Unifreight Africa in a statement to shareholders.
“The restructuring exercise will result in the company having a predominantly local transport focus, divested from public passenger and cross border road freight transportation and will concentrate on the revised assembly of entities,” said the group in statement.
Its local operations include Swift Transport, Bulwark, Unifreight Engineering& Heavy Haulage, Skynet and Tredcor Zimbabwe trading as Trentyre.
Revenue for continuing operations stood at $29 million for the year ended December 31 from $3 million in the prior year.
The continuing operations posted an after-tax loss of $233,000 due to an impairment of $2,5 million incurred on acquisition of Trentyre. The discontinued operations posted a profit of $1,2 million.
Earnings per share for continuing operations fell to -0.16 cents from 4,24 cents. No dividend was declared.
Last year, the group changed its name from Pioneer Corporation Africa to Unifreight Africa Limited.Advertisement