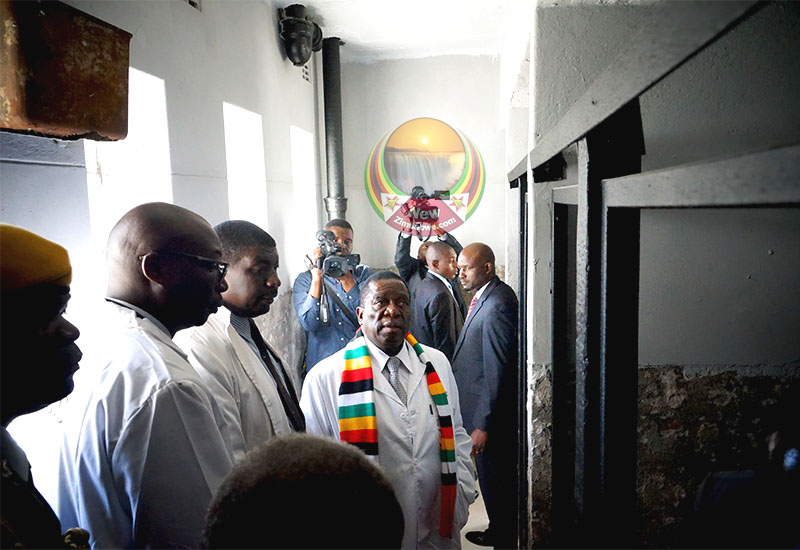 A seemingly un-amused President Emmerson Mnangagwa, inexplicably left Harare’s oldest suburb of Mbare without addressing officials from government and the Harare City Council, as well as residents after a visit to assess progress on the flats rehabilitation project.

A tent, chairs and podium had been set up to allow Mnangagwa to address the gathering, however the President briefly spoke to senior officials before leaving in a cloud of dust, telling officials they should consider moving people out of the flats before renovating. It appeared Mnangagwa had been affected by the fresh paint.

“You must move people while renovating the flats, since it is not healthy. This paint is producing a bad chocking smell and could affect people.

“Before moving to the rehabilitation of the next section of flats please make sure you move people until such time it is safe to do so because some might be allergic to it,” Mnangagwa told officials at close range.

A police band and children brought in to entertain people continued as if nothing had happened.

Local Government Minister, July Moyo said the President will return to Mbare and address people when the renovations are complete.

Zanu PF supporters clad in party regalia had also gathered in anticipation of a speech from the President.

Harare City Council was represented by Town Clerk Hosea Chisango among other officials and councillors.

Aspart of his election promises, Mnangagwa indicated he would have the flats in one of Harare’s poorest suburbs renovated. Mbare along with other low income nieghbourhoods have been the epicenters of cholera and typhoid outbreaks in Harare over the past decade.

Concerns have also been raised about the population in the flats amid reports they have been turned into a haven for criminal and other nefarious activities including prostitution not conducive to children in particular.

Government and the City of Harare are working together in the process of refurbishing Matapi Flats under the process called Transitional Stabilisation Programme (TSP).