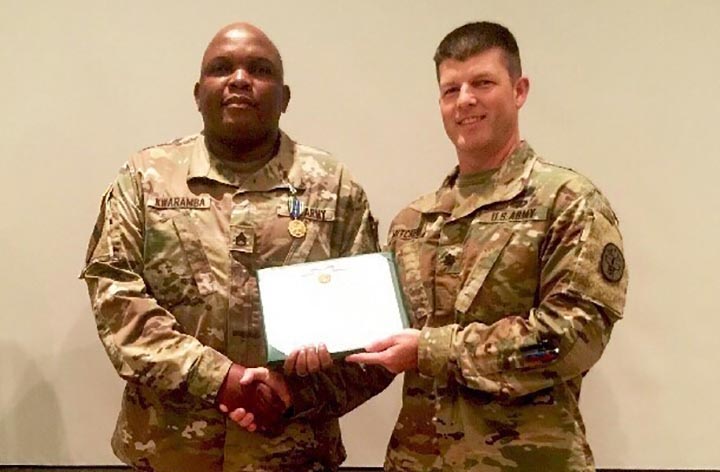 ARLINGTON, Va. – Staff Sgt. Claymore T. Kwaramba says he is a walking talking miracle and living life to the fullest. Born and raised in Zimbabwe, Africa, the son of immigrant parents moved to Dallas, Texas in 1993. He enlisted in the Army in 1999 and had served over 10 years when in May 2010, while stationed in Germany, his life changed forever.

“Nothing prepares you for sitting in front of a doctor and being told that you have stage three colon cancer, especially less than a year after losing my dad to a heart attack and while facing a pending divorce,” Kwaramba said.

Staff Sgt. K, as he is affectionately called, was just three months shy of transitioning out, when he was diagnosed. He was medically extended to remain on active duty to receive treatment.

“It only made sense for me to remain on active duty. Clearly it was divine intervention and meant to be. Looking back, my decision to leave active duty was emotional based on struggles I was having at the time. It would have been a premature decision to get out of the Army and start a new life,” Kwaramba said.

After surgery and six months of chemotherapy, Kwaramba experienced several side effects and although some still linger to this day, he is in remission seven years and counting. Kwaramba credits Joint Base San Antonio’s Warrior Transition Battalion and his faith for his recovery.

“God played a major part in my healing and my immediate family supported me through the process. I met a lot of helpful staff in the WTB at the time who served as an inspiration for me to return as a Squad Leader and give back to this great unit which played a major role in my healing,” he said.

This past winter, Kwaramba was front and center as JBSA celebrated Resiliency Day. The guest speaker at the symposium celebration was Scott Rigsby, a double amputee and Ironman record holder. His speech would reinforce Kwaramba’s take on how to deal with adversity.

“It’s important you never take life for granted, you shouldn’t let setbacks hold you back and always count your blessings.”

Kwaramba has set himself on a new mission.

“I keep myself positive by sharing my story. I personally went through my own challenges for the benefit of someone else. My story and many others’ stories serve as fuel and motivation for others facing challenges or that are about to lose hope. I am always humbled and inspired by the feedback from those I have shared my story with,” said Kwaramba.

This article is taken from www.dvidshub.net