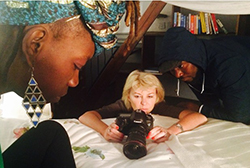 THE Zimbabwe International Film Festival (ZIFF) is this week the site of the world premiere of a University of Bedfordshire film.
Lovers in Time, created by Bedfordshire’s Reader in Film Practice and Theory, Dr Agnieszka Piotrowska, looks at a controversial interracial relationship and has already received acclaim from Thomas Elsaesser, a noted international film historian and professor.
He said: “Lovers in Time modulates its moods quite masterfully between humour and tragedy, real danger and farce.
“It finally leaves the viewer more pensive and thoughtful, but also more positive and hopeful than had the director opted for a racially less entangled and a politically more correct film.”
Dr Piotrowska will be showing two further films, Forbidden Love and The Suitcase, and the screenings will form part of her workshops with acclaimed German Cinematographer Eric Witzgal which will focus on creative collaborations across cultures.
The Executive Director of the Festival, Nigel Munyati, said: “We are delighted to have an opportunity to be premiering this fascinating documentary at the festival this year.
“We believe it is an incredibly optimistic piece of work, showing how collaborative practices are possible and can be very successful.
“We are also very happy to be having Dr Piotrowska holding a variety of workshops at the festival.”
The University of Bedfordshire is also funding a prize for the best short screenplay written by a female Zimbabwean artist at the Festival.
The $500 award – funded by the Media Department at Bedfordshire and open to any Zimbabwean woman who has not yet made a feature film – is designed to encourage female participation in the industry.
Dr Piotrowska, who will be on the panel of judges, said: “I am hoping we can encourage creative female voices in Zimbabwe with the help of leading female artists.
“It is such a privilege to be here. People in this country are simply fantastic, creative and talented.”
The winner will be announced on October 9 during ZIFF’s Short Film Project Launch and Awards Night.Advertisement