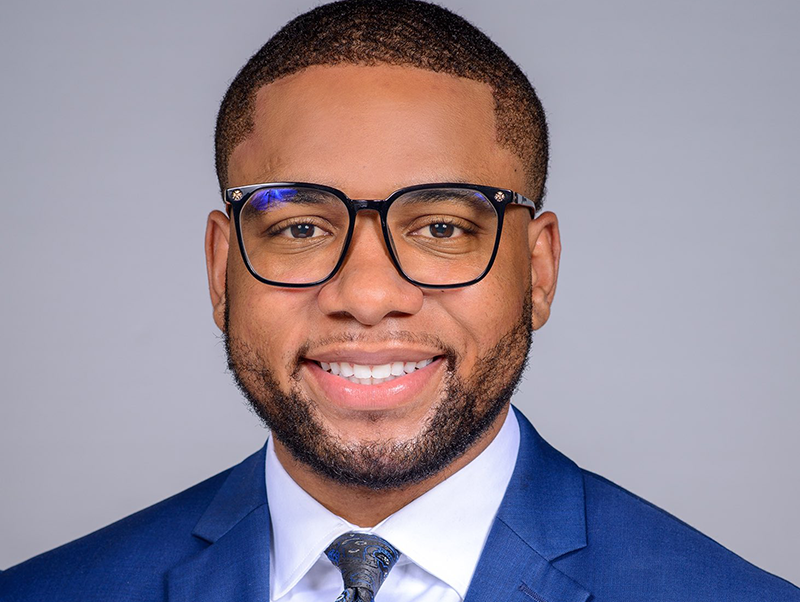 Tino Mkorombindo is a member of the UofL School of Medicine Class of 2022 and also holds an MBA from UofL. In 2020, Mkorombindo started Greater Influence, a nonprofit organization that provides education, resources and mentorship for minority students who want to go into medicine. After graduation, he will train as an orthopedic surgeon at Massachusetts General Hospital with Harvard University.

UofL News talked with him about his work to help and inspire other students through Greater Influence and about those who helped him on his journey into medicine.

UofL News: What led you to become a physician?

Tino Mkorombindo:  I always somewhat had a scientific mind. I always had an interest in medicine, the human body. Ultimately however, what made me realize I wanted to be a physician was my upbringing centered around service. My parents were always doing what they could for others, to a point where sometimes they exhausted themselves. But it was always worth it because they were doing something to make someone else’s situation better. That’s something that I always valued and that’s an integral part of who I am.

As a physician, I get to do what my mind is already geared around – I get to be curious, I get to learn, I get to grow – but at the same time, I get the opportunity to help and to heal in a special way.

UofL News: You came to the United States from Zimbabwe. Tell us more about that journey.

Mkorombindo: We came to America from Zimbabwe just before my 6th birthday. My parents left everything we had because they wanted us to have access to incredible opportunities and a great education. In addition to their jobs, my parents were both very active community leaders and doing well for themselves. Many people told them they were making a mistake by coming to America. When they came here, they were in school full time while working full time at multiple jobs. People told them they were working too hard. This wasn’t going to be worth it. But my parents had a vision.

UofL News: What were the greatest challenges you faced to get into and through medical school?

Mkorombindo: The greatest challenge was getting the information and the resources. I believe there’s a hidden language and a hidden curriculum that students – especially minority students – aren’t aware of. I spent a lot of time trying to figure that out. That is why I created Greater Influence. I realized that a lot of students are not succeeding, not because they’re not capable, not because they’re not intelligent enough, but just because they don’t have access to the right information and resources.

UofL News: How does Greater Influence help minority students get into medical school?

Mkorombindo: The first part of what we do is the non-technical skills where we teach students things like how to communicate, how to network, how to tell your story. And we talk about other things that matter, like mental health, nutrition and exercise. That way they can have all the resources – not just educational, but the things that will put them in the position not only to succeed, but to excel.

Our second component is focused on developing partnerships with organizations that have available resources and are passionate about increasing representation. I was able to work with a test prep company and sponsors to get their premium MCAT prep bundle free of charge to send to 90 underrepresented students. I’ve also secured partnerships to provide ACT/SAT and other test prep materials to students.

We’re celebrating our two-year anniversary and I’m still in awe. In our first mentorship cohort, 11 of 18 students successfully matriculated into medical school, with five of them receiving full-ride scholarships. We’ve amassed almost 3,000 subscribers across our social media platforms and email subscription lists.

We were able to hire our first employee who manages the day-to-day operations, so Greater Influence is going to be sustainable as I go into residency.

UofL News: What made you choose the University of Louisville?

Mkorombindo: It was the culmination of really small interactions. For example, on my interview day I was walking into the medical school building and this lady next to me starts talking to me. We engaged in a stimulating conversation. At the end, I let her know I’m there to interview. She says, ‘Oh, best of luck,’ as she’s entering the building and she says, ‘I should let you know I’m Dr. Amy Holthouser. I’m the associate dean of medical education.’

That interaction let me know that Louisville was the one for me because they cared about me as a person. Because of people like Drs. Holthouser, Erica Sutton, Dwayne Compton and Faye Jones, I’m very happy with my decision to come here and if I could do it all over, I would choose Louisville again.

UofL News: You took a break from medical school and completed your MBA. What motivated you to do that?

Mkorombindo: As one of the UofL Health and Social Justice Scholars, I was taught how to become a leader and an advocate for social justice and change within health care. When I look at health care, a lot of the people who are making the decisions are centered around business or use business terminology that physicians don’t really get a lot of training in. I wanted to develop myself as a leader who would be comfortable in the room where the decisions are made and who can advocate for those that don’t have the voice to be able to do so.

UofL News: Why did you chose orthopedics?

He was right – orthopedics has the complexity in clinical cases, diversity in patient population, passion for innovation and surgical outcomes that were a great fit for me.

Our program director, Dr. Brandi Hartley, invited me to shadow her. From my very first experience, I knew this was what I wanted to do.

UofL News: What did it feel like when you opened that envelope on Match Day and learned you would be doing your residency at Harvard?

Mkorombindo: UNREAL! It was truly unbelievable because I never would have thought this was a possibility. The feeling was even more special because it was bigger than myself. My parents put everything on the line for me to be in the position to be there. So, when I made it to one of the best programs in the world, those years of people telling them it wasn’t going to work out or this wasn’t a good decision, it was worth it.

I never aspired to go to Harvard specifically just because I never thought it was a possibility. Instead, I focused on being the best version of myself that I could possibly be, and I had faith that I would find the program that would set me up to accomplish that.

I have to credit Dr. Craig Roberts, the orthopedics chair at UofL. He gave me the confidence to shoot for the moon. I also must thank Drs. Steven Glassman, Mladen Djurasovic, Leah Carreon, Charles Crawford and the rest of the faculty and staff at the Norton Leatherman Spine Center for their guidance and support.

UofL News: What is your vision for yourself beyond residency?

Mkorombindo: I’m planning to go on to fellowship to specialize after residency. I have a strong interest in spine surgery, but I’m open to other subspecialties within orthopedics. And I’m passionate about research and innovation and I’m going to continue to give back to students who are following me as well.

I also plan to be involved in global health with intentions to give back to my home country of Zimbabwe. My oldest brother, a UofL and UAB-trained pulmonologist, and I have already begun to discuss how we could make this happen.