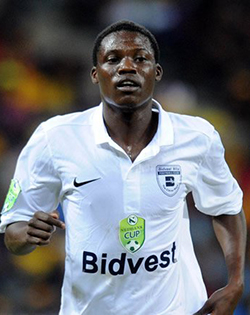 SOUTH African premiership side University of Pretoria have hinted their intentions of retaining Zimbabwean midfielder Denver Mukamba for next season.
Mukamba is on loan at AmaTuks from Bidvest Wits and has of late made good his stay in the capital city; starting 12 games with a further eight substitute appearances and scoring thrice.
“We will have to wait until the end of the season,” Sammy Troughton, the co-coach at Tuks, tells KickOff.com.
“However, you have to understand that Wits are in charge in this situation and so they will determine what happens.
Everything is dependent on discussions as he has done well in some games for us. If truth be told the potential is there in him and even if we say we want him this is all up to Wits.”
After battling to break into the Tuks team earlier in the season, during which he played in the MultiChoice Diski Challenge, the 22-year-old has pressed hard of late, starting 10 of the last dozen matches.
Mukamba remains a fan-favourite in Zimbabwe where he played for popular Harare giants Dynamos.
Danish club asseses Caps United defender