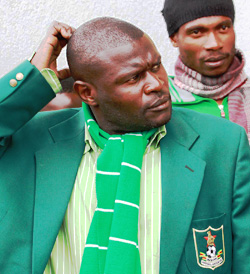 CAPS United players downed tools for the second day on Wednesday in protest over outstanding salaries and bonuses.
The players claimed they had not been paid salaries for May as well as winning bonuses.
Club management tried to engage the players to assure them that their salaries would be disbursed into their individual banks but they still refused to train.
The players were, initially, supposed to train in the morning but most did not show up with only the technical team headed by coach Lloyd Chitembwe, assistant Mark Mathe and team manager Shakespear Chinogwenya in sight at their Barclays training ground in Mount Pleasant.
Chitembwe declined to discuss the issue, only saying the matter had been attended to and that players would report for the afternoon training session.
However, the players did not report for training again in the afternoon.
Caps United have been enjoying stability since Harare businessman Farai Jere took over control of the club and were even flown to Hwange for their league match two weeks back.
They are one of the better organised teams in the league with players’ salaries being bankrolled by Jere while BancABC bankrolls salaries for Dynamos and Highlanders players.
Club chief executive Cuthbert Chitima could not be reached for comment Wednesday as he was engaged in meetings.
The players were however, expected to train on Thursday as they prepare for the trip to Mutare for a league clash against Mutare City Rovers this weekend.
Reports late Wednesday suggested they were eventually paid their salaries.