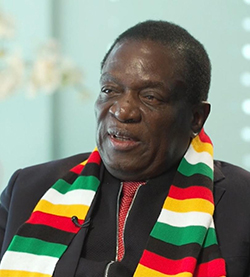 PRESIDENT Emmerson Mnangagwa has set himself up for an early test to his scant popularity in hostile Matebeleland North where he is due to hold two rallies this coming weekend.
The ruling Zanu PF presidential candidate for this year’s elections seems to have hit the campaign trail, beginning with a home coming rally in his Midlands home province last Saturday.
In Matebeleland North, Mnangagwa is expected to address the first rally at Mabale Business Centre in Hwange, where is also expected to assess the Gwayi-Shangani dam project before heading for the next venue at Ngwigwizi River Bridge along the Bulawayo-Nkayi road.
It would be the first time Mnangagwa visits the region in his capacity as President.
Matebeleland North saw the worst of the Gukurahundi violence that killed an estimated 20,000 civilians in the predominantly Ndebele province in the early 1980s.
Mnangagwa’s name is cited among the most prominent of then Prime Minister Robert Mugabe’s allies who directed the gruesome killings of innocent civilians in the region under the ostensible reason of tracking down dissidents who posed a security threat in the restive region.
The new President came face-to-face with the anger towards him on the eve of New Year when a group of pro-Matebeleland youths staged a protest against him during a thanksgiving ceremony that had been organised for him by churches in Bulawayo.
The Mthwakazi Republic Party youths were demanding Mnangagwa comes clean on his role during the Gukurahundi massacres.
His response was an equally hostile one as the youths were seized from the venue by police and some army officials who later took them to local military barracks and reportedly subjected them to torture.
Mnangagwa could as well brace for a similar reception when he visits the area this coming week.
In what was construed in some quotas as lack of empathy for both the victims and survivors of the killings, Mnangagwa declined an invitation to apologise for the first time for the killings when he was being interviewed by international media during his visit to Davos last month for the World Economic Forum.
He insisted that what government to atone for the brutalities was to sign into law the National Peace and Reconciliation Bill whose purpose, among other things, is to allow those affected by the country’s past conflicts to speak about their losses.Advertisement

“My dear, my people and myself are determined to make sure that the acts of commission or omission in the past we will interrogate them,” Mnangagwa said while evading pressure by his BBC interviewer to apologise to the victims back home.
“Where the government of the day was wrong, we point out that that was wrong; where the government of the day was correct, we should say so and we have put up a machinery to achieve that.
“I don’t know where your problem is, but this is how I am dealing with the situation.”
Responding to the snub, pro-Matebeleland groups described Mnangagwa as unrepentant.