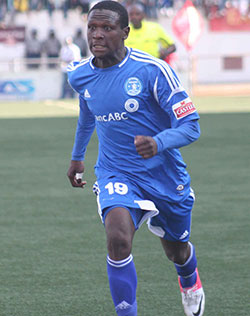 UNSETTLED Dynamos striker Simba Sithole now known officially as Simba Nhivi has asked for a transfer to his former club Caps United.
Dynamos president Keni Mubaiwa confirmed on Monday that Nhivi had submitted a transfer request which they accepted and were now waiting for was their money.
“I can confirm that we have received his transfer request to join Caps United and we have accepted it. All we are just waiting for is the money. We have agreed on everything,” said Mubaiwa.
However, with the transfer window having closed last Friday, it means the Dynamos striker will have to wait for the next season to rejoin Caps United.
Nhivi, who has played in South Africa turning out for Mamelodi Sundowns has not seen much action at Dynamos this season after he sustained an injury.
Although he has now recovered, he is struggling to get game time and believes he can revive his career at Caps United where he blossomed to attract foreign clubs.
Nhivi has six months left on his contract with Dynamos.
He played for Caps United in 2010, scoring an incredible 10 goals in 10 starts. He then moved to South Africa joining Mamelodi Sundowns but did not have a happy stay there as he struggled for game time.
The striker then opted for the termination of his contract before returning home in 2012.Advertisement