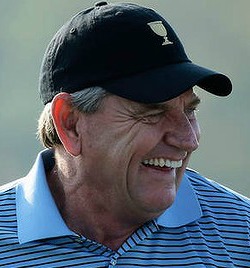 BEATEN but unbowed after a gruelling week that ended in defeat, Nick Price said he would love another chance to captain the International team in the Presidents Cup.
His first assignment in charge ended in failure on Sunday when his team were beaten by a powerful US side who played at the peak of their powers.
But the Zimbabwean said the disappointment of defeat had only whetted his appetite for more and that he would happily take on the job again.
“This was just a phenomenal week for all of us and I want to congratulate the US team. They played golf that was just incredible to watch,” Price said.
“But for this (the International) team, I would be honoured if they ever asked me to be captain of this team again, I don’t care where it is.”
As a player, Price competed in five Presidents Cups but said that none of those experiences had prepared him for the unique challenges he had faced as captain.
His team, which comprised players from six countries, only came together for the first time a week before the event, complicating Price’s most important task of trying to match up the best combinations.
He was further frustrated by torrential rain during the tournament.
The heavy downpours caused havoc with the schedule and forced a backlog of matches. With tournament organisers forced to make up time, the players had to arrive at the Muirfield Village Golf Club before dawn and stay until after dusk.
“These guys had to get out of bed at 4.30am on the last two mornings, play 36 holes in very sloppy conditions, and then next day play what … 25, 27 holes?”
The Internationals trailed the Americans from the outset and faced the almost impossible task of needing to win 10 of the 12 singles matches on Sunday to clinch the title.
No team has ever come from behind to win but the Internationals gave it a good try before losing by 18½ points to 15½.