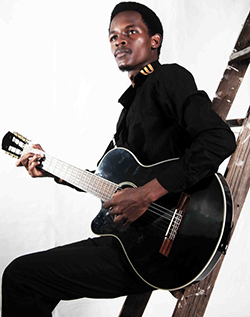 AFTER a successful three-month sojourn in Germany where he performed at various stages, upcoming musician Munya Nyamarebvu will share his experience at the Zimbabwe-Germany Society on Saturday night.
The musicians, who went as part of the Acoustic Night All-Stars along with Tendai “Tendex” Mudzviti, Prayersoul Mtungamiri, Fungai Negare, Tariro Negitare and Violet Senderai, will stage a show dubbed Deutschland Tales.
Nyamarebvu said the show would feature Tendex and Tariro Negitare.
“It is a concert at which I will be sharing my personal encounters from my first Germany tour, while Tariro Negitare and Tendex will perform as guest artistes,” he said.
“My performance will also highlight songs from my debut album titled Ndirindega (All Alone) which will be released next year,” Nyamarebvu said.
“I will then introduce my Afro-beat ensemble Root Kalimba later on in the show.”
During the show, there will also be screenings of Nyamarebvu’s Germany projects.
“I will be screening two videos of songs I recorded during my tour. These are collaborations, one with reggae and Afro-beat artiste Wally Warning who hails from Aruba, South America, but is Germany-based, called Rangarira,” he said.
“The second one is a remake of a song I recorded earlier at Pakare Paye Studios off my forthcoming album Ngatidanane on which I collaborated with a Germany classical musician Elisa von Wallis.”
Nyamarebvu said he also collaborated with Warning on three other songs.
The show is expected to be attended by Harare mayor Bernard Manyenyeni, world-renowned optician Dr Solomon Guramatunhu, who sponsored part of Nyamarebvu’s air fare to Germany and Sports Arts and Culture deputy minister Tabitha Kanengoni-Malinga who helped process his passport.
The Acoustic Night All-Star team went to Germany in July and came back late September.
They performed with German band Jamaram at more than 15 festivals in different cities, among them the Chiemsee Reggae Festival along with Jamaican stars Shaggy, Luciano and Alpha Blondy, and at the Tollwood Festival along with another Jamaican star Gentleman.
The team also got to record a collaborative album with Jamaram which is scheduled for release next year.Advertisement