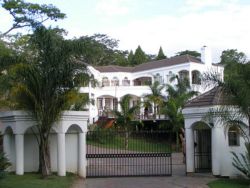 AN upmarket Harare lodge, Pandhari Lodge, is set to be auctioned by the Deputy Sheriff of the High Court in Harare on Friday to offset a debt it owes a CABS.
According to auctioneers, Realty World, the public auction of the luxurious lodge in Glen Lorne is scheduled to be held at the Raylton Sports Club.
It could not be established how much Pandhari Lodge owed CABS, a leading local financial institution.
In a notice this week, Realty World said Pandhari Lodge is “an upmarket facility comprising luxury suites, bars, kitchen, conference and functions rooms, reception and offices.”
However, the auctioneers and the Deputy Sheriff said they were denied access into the lodge in order to furnish the officials with the auction notice.
In May this year, the lodge attached and auctioned housing property worth $117,000 belonging ZIFA president, Cuthbert Dube after the football association failed to pay the lodge for hosting the Warriors soccer team.
The Warriors had booked at the lodge in preparation for national assignments between February 3 and September 30, 2013.
Dube had offered himself as guarantor.
Meanwhile, the auction of Pandhari Lodge on Friday is part of an auction of some 35 immovable properties at the Raylton Sports Club on behalf of various financial institutions.
Among the properties to be put under the hammer is a four bedroomed house in Budiriro, Harare, belonging to ZBC news presenter, Walter Mufanochiya and three others in order to settle a debt with the People’s Savings Bank (POSB).Advertisement