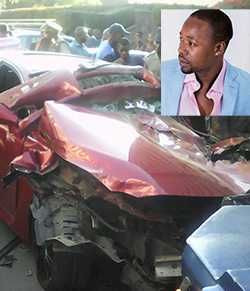 URBAN grooves star Stunner on Monday afternoon stunned motorists and shoppers in central Harare when he smashed into four parked vehicles and fled from the scene of the accident.
Eyewitnesses told NewZimbabwe.com that the singer tried a move style spin along Jason Moyo Street and failed to control this red Lexus vehicle.
The singer, whose real name is Desmond Tambaoga Chideme, is famous for his music but his public profile rose several notches after a sex tape with former BBA contestant Pokello went viral.
The scene of Monday’s accident – the intersection of Jason Moyo and Fourth Street – is usually crowded with vendors and also serves as a pick up point for pirate taxis operating between the fourth street bus rank and market square.
The singer blamed a burst tyre for the accident.
“It is amazing that I am alive and escaping from a scene like this is just a miracle. I was not speeding at all. I was just coming from Fourth Street traffic lights, I believe I lost control of my car when my front tyre burst,” he was reported as saying.
“I am very fit and strong as you can see. What pains me the most is that I was still paying for this vehicle. It is so sad that before I could even finish paying the balance, it is badly damaged.
“I am yet to get the correct information about injuries at the scene but I pray that there are no serious injuries.”
However, witnesses claimed he had tried to pull off a spin on the road.
“He turned into Jason Moyo St and stopped right in front of the road and gave the unsuspecting shoppers a spin much to their amusement,” said an excited vendor calling himself Mukanya.
“However, when he tried the second spin, traffic lights had turned green and released vehicles into Jason Moyo St. When Stunner tried to avoid the cars he lost control and rammed into the four parked vehicles.”
Another eyewitness said Stunner did not wait to see what happened as he ran away from the scene of the accident.
“He just opened the door of his car and fled like a bullet.”
Police details had a torrid time trying disperse onlookers keen to see the singer’s car and the damaged vehicles, causing traffic jam at the busy intersection.Advertisement