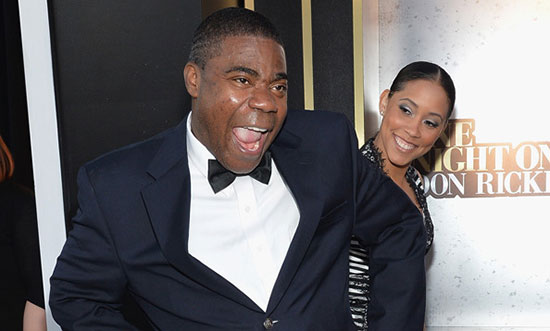 US actor Tracy Morgan, known for his Emmy-nominated turn on television comedy “30 Rock,” has been critically injured in a six-car crash in New Jersey that killed one of his friends.
The incident occurred as the 45-year-old Morgan, a former star of “Saturday Night Live,” was heading home from a stand-up performance in the East Coast state of Delaware.
A 35-year-old Georgia truck driver — identified as Kevin Roper — was charged with one count of death by auto and four counts of assault by auto, according to a statement from state prosecutors, cited by local media.
Roper’s truck allegedly caused the accident on the New Jersey Turnpike near the state capital Trenton, which involved Morgan’s limo bus, another truck, two cars and an SUV.
Authorities in New Jersey said the vehicle carrying Morgan, which had seven people on board, may have been struck from behind.
“Tracy remains in critical condition at Robert Wood Johnson Hospital. He sustained these injuries in an accident that occurred early this morning as one of several passengers in a chauffeured SUV returning from a tour date in Delaware,” said the actor’s spokesman Lewis Kay.
“His family is now with him, and he is receiving excellent care.”
Three other people besides Morgan were hospitalized, two of them in critical condition, a hospital spokesman told AFP.
The National Transportation Safety Board said on Twitter that it was “sending investigators to the scene” to look into the circumstances of the crash.
Morgan — who performed Friday night at Dover Downs Hotel & Casino in Delaware — was nominated for an Emmy in 2009 for his role on “30 Rock,” which also starred Tina Fey and Alec Baldwin.
On “30 Rock,” a show about the cast and writers of a sketch comedy show resembling “Saturday Night Live, he played Tracy Jordan, a caricature of himself. The program ended its seven-season run in early 2013.
Morgan appeared on “Saturday Night Live” from 1996 to 2003.Advertisement