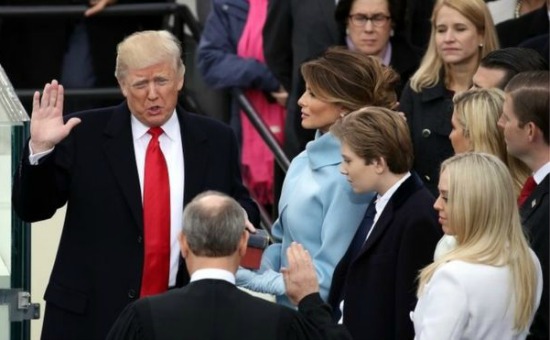 PRESIDENT Donald Trump ordered 60 Russian diplomats the U.S. considers spies to leave the country and closed Russia’s consulate in Seattle in response to the nerve-agent attack on a former Russian spy in the U.K., as European allies and Canada took similar measures.

It’s the largest such expulsion in U.S. history. Worldwide, more than 100 Russian diplomats were sent home in a concerted effort to demonstrate NATO and European resolve to punish President Vladimir Putin’s government for the U.K. attack.

The expulsions are the most aggressive U.S. move against Russia under Trump, who has sought a closer personal relationship with President Vladimir Putin while at the same time introducing new sanctions against people and entities with ties to the Kremlin.

“Today President Donald J. Trump ordered the expulsion of dozens of Russian intelligence officers from the United States and the closure of the Russian consulate in Seattle due to its proximity to one of our submarine bases and Boeing,” White House press secretary Sarah Huckabee Sanders said in a statement. “The United States takes this action in conjunction with our NATO allies and partners around the world in response to Russia’s use of a military-grade chemical weapon on the soil of the United Kingdom, the latest in its ongoing pattern of destabilizing activities around the world.”

European Council President Donald Tusk said that 14 EU countries would expel Russia diplomats, and those announcements came in rapid succession, from France and Germany to Latvia and Estonia.

“I’d say that this is more than one could have expected,” Stefan Meister, a Russia expert at the German Council of Foreign Relations in Berlin, said of the collective action. At the same time, “it worsens relations and also makes a return to a normalization more difficult, which means that almost any divisive case can lead to a further level of escalation.”

U.S. officials called the March 4 poisoning of Sergei Skripal and his daughter in Salisbury, England an attack on America’s closest ally and a reckless attempt to murder a British citizen on British soil. One official said more than 100 people were affected by the attack, which employed a class of nerve agent manufactured by the Soviet Union called “Novichok,” May’s government has said.

The U.S. officials said more than 100 Russian intelligence agents work under cover as diplomats in the U.S. and described the number as unacceptable. They said the U.S. could take further action in the future.
QuickTake: The Russian Nerve Agent That’s Spooking Britain.

“It was constructive, and we very much hoped that those thoughts expressed by the two leaders would be carried out in concrete ways,” he said.

The Russian embassy in Washington later posted a tweet asking followers to vote on which U.S. consulate in Russia should be shut down in retaliation for the order to close its outpost in Seattle.

The 60 people expelled from the U.S. include 48 attached to the Russian embassy and 12 at the country’s mission to the United Nations. They have seven days to leave the country, the officials said. It’s the most Russian diplomats to be expelled in a single action in U.S. history, though former President Ronald Reagan sent home 80 Soviet embassy staff and UN personnel in two separate orders in 1986.

The MOEX Russia index of stocks closed down 2 percent, its steepest slide in almost a year, led by Gazprom PJSC and Sberbank PJSC. The ruble erased gains, trading little-changed at 57.3075 per dollar as of 7:12 p.m. in Moscow. The government’s 10-year ruble bonds dropped, lifting the yield five basis points to 7.06 percent. Russian credit-default swaps climbed to the highest since Jan. 1.

The U.K. had already expelled 23 Russian diplomats in response to the attack on Skripal and his daughter, which Prime Minister Theresa May’s government determined was perpetrated by Russia. Putin’s government in turn ordered 23 British diplomats out of Russia over what it called “unsubstantiated accusations.”

Last week EU leaders declared in a statement that it was “highly likely” there was “no plausible alternative explanation” other than Russia being to blame.
While the U.K. and EU also recalled their ambassadors from Russia in response to the attack, the U.S. has no plans to withdraw diplomats from the country, the officials said.

U.S. policy toward Russia has grown more aggressive in recent months, but some Trump critics say he’s been slow to respond to Putin’s provocations. Some have drawn a connection to special counsel Robert Mueller’s investigation of possible collusion between Trump’s 2016 campaign and the Russian government, as well as Trump’s past business relationships with Russian figures.

Trump faced criticism last week for congratulating Putin during their phone call on his re-election, a vote observers said was marred by irregularities. After the call, Trump said he hoped to meet with Putin in the “not-too-distant future.”

“The United States stands ready to cooperate to build a better relationship with Russia, but this can only happen with a change in the Russian government’s behavior,” Sanders said in her statement.

The expulsions drew rare, if conditional, praise for Trump’s stance toward Putin from Democrats. Senator Robert Menendez of New Jersey, the top Democrat on the Senate Foreign Relations Committee, said in a tweet that he welcomed the move, adding, “It is time to take this national sec threat seriously, develop an actual Russia strategy and fully implement the mandatory sanctions Congress passed over 7 months ago.”

It is common for countries to station intelligence agents overseas under cover as diplomats, whose presence at embassies is accepted with a wink and a nod by their host nations.

The Obama administration expelled 35 Russian diplomats and shut down two embassy compounds that it said were used for “intelligence-related purposes” in December 2016 in response to alleged Kremlin hacking of the presidential election that Trump won.

Putin held back from an immediate response, a decision praised as “very smart” by Trump, who’d campaigned on a pledge of improved relations with the Kremlin leader. But after legislators passed a law last July that prevented Trump from easing sanctions without congressional approval, Putin ordered the U.S. to cut staff at its diplomatic missions in Russia by 755, or nearly two-thirds, by Sept. 1, to create parity with Russian embassy officials in the U.S.