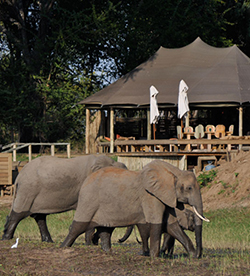 ESTRAORDINARY Journeys, the New York-based tour operator and Africa specialist, last Friday staged a press event here to promote its services in Zimbabwe while confronting the question — raised by some travel professionals and customers — of whether tourists should travel to Zimbabwe at all.
Extraordinary Journeys’ answer is a firm “yes.”
The tour operator said Zimbabwe’s government “has actively deterred travel in recent years, and even agencies and operators are actively trying to boycott tourism in Zimbabwe today.”
Marcia Gordon, Extraordinary Journeys cofounder, said the boycott question originated at her firm with a non-profit “haranguing us,” arguing against travel to Zimbabwe because of the government and, particularly, the authoritarian president, Robert Mugabe.
“Clients wondered about this, too,” she added.
Although not all tour operators agree, Gordon said, Extraordinary Journeys concluded that “the worst thing is to not go if you care about Zimbabwe.”
Mark Homann, a Zimbabwe-born licensed private tour guide, said that after Mugabe nationalised white-owned farms beginning in 2000, tourism collapsed, costing an estimated 10,000 to 15,000 jobs.
That number is more important than it seems, he said, because those workers would have been supporting 10 to 15 people each in their extended families.
Lost jobs, he continued, translate into a smaller middle class — and it becomes easier for Mugabe to control the people whereas a tourism boycott doesn’t affect the president’s behaviour at all, he added.
The animals need tourists, too.

For one thing, the government does not fund Zimbabwe’s national parks, Homann said. The parks have to generate the income for maintenance and conservation, with tourism as one of those income sources.
And, when jobs are connected to the wildlife, locals have more interest in the animals’ wellbeing.
Homann pointed out that tourist safari camps are the source of significant community funding in Zimbabwe; all of Singita’s earnings, for example, go into conservation and community programs, he said.
In a presentation, Homann ticked off a list of attractions that make Zimbabwe a good tourist destination — the full range of wildlife that safari-takers seek, including a surprisingly good number of rhinos; Victoria Falls; and Great Zimbabwe.Advertisement

Then, Homann — married to an American and based in the U.S. — told his audience that it was a pleasure to be touting the attractions of his homeland.
“It has been ignored for so long,” he said.