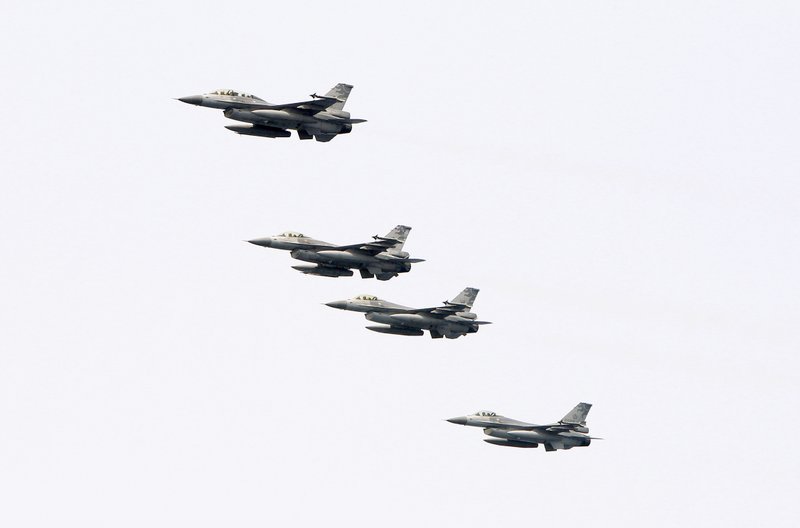 WASHINGTON: A deterioration in U.S.-China relations, seen most dramatically in their escalating trade dispute, is spilling over into the military arena.

The Pentagon on Tuesday confirmed that China had canceled a Washington visit by the head of its navy, and U.S. officials said China had denied a request for a U.S. Navy ship to make a port visit next month at Hong Kong.

The Chinese foreign ministry warned of “severe damage” to bilateral relations if the sale announced Monday goes through. Washington has no official relations with Taiwan’s democratically elected government but is obliged by U.S. law to see that it has the means to defend itself.

The backdrop to these tensions is the U.S.-China trade dispute. Each imposed tariff increases on the other’s goods Monday, and Beijing accused the Trump administration of bullying. A Chinese official said China cannot hold talks on ending the trade dispute while the U.S. “holds a knife” to Beijing’s neck by imposing tariff hikes.

The two countries are mired in a dispute over Washington’s allegations that Beijing pilfers foreign trade secrets and forces U.S. companies to hand over technology in return for access to the Chinese market. The predatory practices, the U.S. says, are part of China’s relentless drive to challenge American technological dominance.

Also at stake, beyond economic cooperation, are U.S. hopes for gaining China’s help in persuading North Korea to give up its nuclear weapons. In his address Tuesday to the U.N. General Assembly in New York, Trump thanked Chinese President Xi Jinping for his assistance with the North Korea problem, but he also blasted China for what he called unfair use of international trade rules to diminish U.S. jobs and deepen U.S. trade deficits.

“Those days are over. We will no longer tolerate such abuse,” Trump said.

Military ties between Washington and Beijing have been relatively stable in recent years, even as the U.S. complained of China militarizing reefs and islands in the South China Sea amid overlapping territorial claims by other Asian nations. In May, Defense Secretary Jim Mattis disinvited China from participating in a multinational naval exercise in the Pacific. Pentagon officials cited China’s military buildup on disputed South China Sea islands.

In recent days the breadth of military tensions has grown. A Pentagon spokesman, Army Lt. Col. Dave Eastburn, said China informed the Pentagon that the chief of the Chinese navy has been recalled to Beijing, canceling a planned meeting with his American Navy counterpart at the Pentagon after visiting a naval conference at Newport, Rhode Island.

On Monday a reporter asked Mattis what he made of these developments and how he expected to address them.

“Right now, it’s too early to say. We’re still sorting this out,” he said, adding that he and Secretary of State Mike Pompeo agree “we do have to have a relationship with China. … And so we’re sorting out the way ahead right now.”

Mattis visited Beijing in June, making him the first Pentagon chief to do so since 2014.

In addition to its anger over the $330 million military sale to Taiwan announced on Monday, China is strongly objecting to a U.S. decision to issue a visa ban and assets freeze on China’s Equipment Development Department and its director, Li Shangfu.

The U.S. action relates to China’s purchase from Russia of Su-35 combat aircraft last year and S-400 surface-to-air missile system-related equipment this year. Those purchases violated a 2017 law intended to punish the Russian government for interfering in U.S. elections and other activities.

China’s Defence Ministry said the U.S. had no right to interfere in Chinese military cooperation with Russia and demanded the sanctions be revoked. In addition to warning that failure to revoke the sanctions would mean Washington “must bear the consequences,” Beijing postponed a meeting it had been scheduled to host this week between U.S. and Chinese military staffs.

In a further act of retaliation, China turned down a request for an October port call in Hong Kong by the U.S. Navy’s amphibious assault ship USS Wasp. China last denied such a visit in 2016 amid a spike in tensions between the sides over the disputed South China Sea.

“We have a long track record of successful port visits to Hong Kong, and we expect that will continue,” said Eastburn, the Pentagon spokesman, in confirming that China had not approved the Wasp’s visit.