WASHINGTON — The US Capitol descended into chaos yesterday as thousands of supporters of outgoing Donald Trump staged an attempted coup at the president’s urging.

The rowdy supporters rioted and breached the halls of Congress while elected officials were beginning to certify Mr Joe Biden’s presidential election win, and gained access to the floor of the Senate, setting off an armed standoff with law enforcement in the House of Representatives.

A shot was apparently fired inside the Capitol, according to a witness video posted to social media, which showed a person draped in a Trump flag slumping to the floor.

“This attempted coup is Trump’s fault. This is what the president has caused today, this insurrection,” Senator Mitt Romney told a reporter. 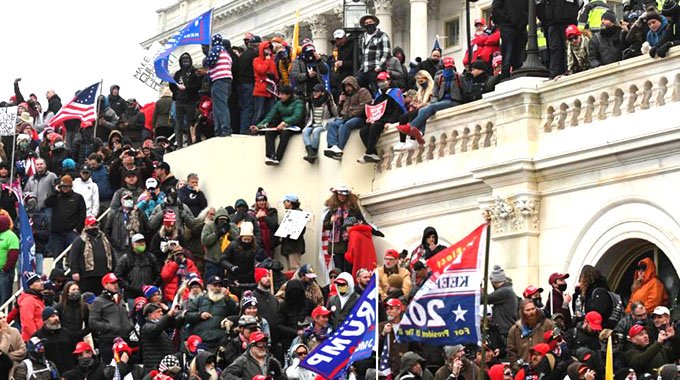 The insurrection, egged on by an aggrieved Trump who refuses to concede an election he has firmly lost, came when his supporters stormed the Capitol yesterday morning, with many supporters breaking through barricades of police officers and breaching the doors.

With the violence already underway, Trump tweeted asking for his supporters at the Capitol to “remain peaceful.”

The chaotic scene at the Capitol was unprecedented.

Rioters waving Trump flags and banners ostensibly in support of police openly clashed with law enforcement officials, who seemed unprepared for the onslaught of people that the president has been promising for days now.

Members of Congress said tear gas was being dispersed inside of the Capitol building, with members being asked to grab the gas masks below their chairs. As Capitol Police told members to prepare to relocate to their cloakrooms, Democratic Rep. Steve Cohen yelled, “Call Trump! Call your friend!” according to a pool report.

Just after 2.15 pm, the House and Senate recessed and Capitol Police locked the doors to the House gallery, warning members not to leave, as House leaders were escorted out, according to pool reports.

Representative Dean Phillips of Minnesota reportedly yelled, “This is because of you,” apparently in reference to his Republican colleagues objecting to certifying electoral results.