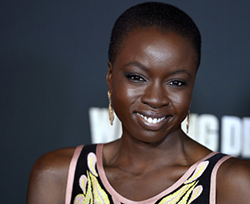 WHEN Danai Gurira’s play Eclipsed, which depicts the suffering, strength, and resilience of a group of women forced to be the “wives” of a rebel leader during the second Liberian Civil War, opened on Broadway this past March, the playwright and actress, who is famous outside of theatre circles for portraying The Walking Dead’s kick-ass Michonne, realized her production had achieved a level of visibility that she could use to create awareness of injustices faced by girls and women around the world.
“I wanted to use this play as a platform for activism around these issues as much as possible,” she tells Co.Create, “and I was really trying to figure out how I do that in a way that equips an audience and gives people an ability to learn more.
“I know it’s very overwhelming to figure out how to connect with these issues and what do to, and I wanted to create a conduit for that.”
So, recently, Gurira organized a post-performance Q&A with Emmanuel Ogebe, an international human rights lawyer, and two Nigerian girls who escaped after being kidnapped by the terrorist group Boko Haram, and she started a dedication series, kicked off by Bono, that finds a special guest or a member of the Eclipsed cast dedicating that particular performance to two abducted and still missing girls in Africa and other parts of the world.
Beyond the in-theatre efforts, Gurira has also launched Love Our Girls, a website that makes larger issues relating to education, physical and sexual abuse, health, and poverty more personal by introducing visitors to individuals like Faith, a Nigerian sex trafficking survivor in need of a kidney transplant, and Mary, a Kenyan woman who learned she was HIV-positive during her first pregnancy.
Love Our Girls encourages visitors to use their own social media networks to spread the stories of the girls and women featured on the site on the 14th of each month, using #loveourgirls.
Awareness hub
“No one can be moved, no idea can be sparked unless people have an awareness. So it’s really an awareness hub,” Gurira says of Love Our Girls.
“We constantly rotate our information and bring in more voices you can hear from directly and learn what is happening and what is being done and how you can connect.”Advertisement

While speaking to Gurira about Love Our Girls and the visits she has made to Capitol Hill to advocate for girls and women, you can feel the passion she has for being involved in activism beyond storytelling.
“I’ve always wanted to be as deeply involved in activism around girls’ and women’s issues as possible,” she says.
“I’ve been working a lot with the ONE campaign in the last couple years and really connecting more with how ONE actually advocates. I’ve been learning from them, and I’m becoming a more active activist, really.”
But storytelling, and playwriting in particular, is a core—not to mention valuable—component to her activism
“This is the medium I have been given. This is my craft. This is my art form,” says Gurira, whose playwriting credits include In the Continuum, a play she co-wrote with Nikkole Salter (they also costarred in an off-Broadway production of the play in 2005 and toured the country with it) about two women—one living in South Central Los Angeles and one living in Zimbabwe—who have been diagnosed HIV-positive.
See statistics as actual people
“Narrative is in my toolbox, and what I find powerful about narrative is that it actually allows people to be connected, to be disarmed, to see other people across the world that they might perceive of as statistics as actual fellow people that they care about and that they want to see freed to live self-determined lives.”
Born in the United States, Gurira moved to Zimbabwe when she was a child and grew up there, and she has felt compelled to bridge the gap between America and Africa in her work.
“I’m an African woman who was raised in Africa but who is American by birth, and that combination of self has propelled my makeup,” she says. “And, honestly, I find it very joyful to create narratives around the African female voice.”
In doing so, she is giving actresses of African descent roles “that are interesting and meaty and complex and put them in the front and centre because, to me, that’s seriously a part of my artistic mandate,” Gurira says, “and my activism is about creating opportunities for those who often don’t get them, who often don’t get the chance to show their stuff, to be in the spotlight even if they have the chops.”

Danai Gurira as Michonne in ‘The Walking Dead’